Until the 1800s life expectancy across Europe averaged between 30-40 years, now the average life expectancy in the USA is almost 78 years, and our interest in aging has only grown: there are now over 100 companies in the US dedicated to longevity research. One of the reasons there is so much attention being paid to aging research is that it is vital for public health. Aging research not only has the potential to identify longevity-enhancing compounds, but also help understand the aging process which is a critical risk factor for a variety of human pathologies including most cancers, Alzheimer’s, and heart disease.

Traditionally, longevity experiments used mammalian models such as mice, and as a result, the studies are very expensive, and very time consuming. This is where C. elegans can help. The nematode Caenorhabditis elegans have a short lifespan, morphological simplicity, and are easy to maintain and genetically manipulate, making them well-suited for large‐scale genetic and pharmacological screenings (Giunti, Andersen, Rayes & De Rosa, 2021).

As a result, C. elegans have been a pioneer in studying the genetic effect of aging, and in recent decades have led to the identification of numerous anti-aging compounds (Kim & Lee, 2019). The DrugAge Database of Anti-Aging Drugs is a resource whose aim is to make information regarding the genetics of aging widely available by manually curating a database of compounds that extend lifespan in model organisms.

The DrugAge Database contains information on 396 compounds tested on C. elegans, 280 of which resulted in a statistically significant increase in C. elegans lifespan (241 that had at least a 10% increase, and 13 of those had at least 50% increase) [See Table 1]. 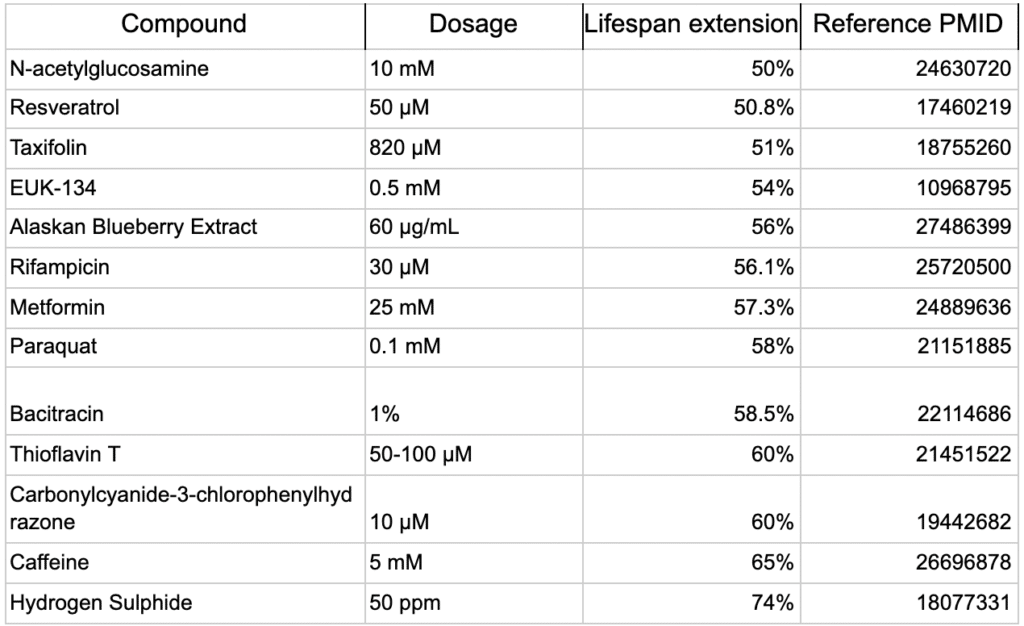 Table 1. The 13 Compounds tested on C. elegans that resulted in >50% increase in mean lifespan.

Notably, of the 397 compounds tested on C. elegans, 19 of these compounds were also tested on mice and rats. Of the 19 compounds, 11 extended the lifespan in both types of organisms and one compound had no effect on either type of organism. Most significantly, none of the compounds extended lifespan in mice/rats alone but not C. elegans [Table 2].

These findings highlight the high translational value of C. elegans as a model organism, and show how valuable they can be as a tool for identifying novel drugs and drug targets. Since C. elegans studies are so cost effective while maintaining a conserved aging-regulating process to mammals, they are an excellent choice for an initial test subject in drug discovery, and longevity research studies.

Table 2. The 11 compounds that resulted in a significant increase in lifespan in C. elegans and mammalian models

There are two approaches to screening that are used in drug discovery research:  target-based drug screens (TBS), and phenotypic-based drug screens (PBS) (Owens, 2018).  In TBS drug screens are carried out in vitro, directly on a targeted protein. Since the protein target has already been identified, this method does not allow for novel targets to be discovered, or the mechanisms of action (MOA) to be better understood. Conversely, in PBS the animal (or cell) model is used to see whether the intended effect is achieved, and then the compounds are identified. Since the PBS approach is target independent, it allows for compounds to be identified that have previously unseen mechanisms.

The majority of first-in-call small molecule drugs are discovered using PBS, and the pharma industry has taken note: the number of drugs screened in C. elegans has increased every year over the past decade (Swinney & Lee, 2020; Giunti et al., 2021).

Traditionally, preclinical drug discovery takes over ten years, but this process can be significantly reduced by using C. elegans for all the reasons previously discussed (low cost and maintenance, simple structure, high translational value). C. elegans have already contributed to the breakthrough in identifying compounds involved in areas such as neurodegeneration, pathogen infections, and metabolic disorders as well as the newly identified lifespan-extending compounds [Table 1] (Giunti et al., 2021). In conclusion, C. elegans could guide the development of longevity-enhancing drugs, and have the potential to greatly accelerate the drug discovery pipeline overall.