In the age of industries continuously creating and remodeling chemicals, having a reliable way to test their toxicity is vital. At the same time, across all areas of research, there is the desire to shift away from traditional animal models. In this article we outline the New Approach Methods (NAMs) and some of the steps being taken to implement them.

Regulatory toxicology dates back centuries, however, the 21st century has seen major industries such as the pharmaceutical, agriculture, and cosmetic industries develop and repurpose more chemicals with unknown effects, making the need for reliable toxicity-testing even more crucial (Fischer, Milton & Wallace, 2020). Historically, the safety of these consumer products was tested on animals, but the push to reduce animal use in scientific research has led to an emphasis on the development and use of New Approach Methods (NAMs) (Hatherall et al., 2020).

The term ‘NAMs’ typically refers to in silico, in chemico, and in vitro methods, as these were the methods described by the Environmental Protection Agency’s Next Generation Risk Assessment: Incorporation of Recent Advances in Molecular, Computational, and Systems Biology (U.S. EPA, 2014). Since this report was published, however, NAMs have expanded to include any approach using non-mammalian models.

While many of these alternate models were already accepted in toxicity testing, their popularity has skyrocketed thanks to these regulatory directives, new technological advances, and the studies showing the excellent concordance between mammalian and non-mammalian models of toxicity (Figure 1.) (Cassar, 2020; Sipes, Padilla & Knudsen, 2011).

At InVivo Biosystems we are at the forefront of this shift towards a more integrated approach to toxicity assessments. Our team uses zebrafish and C. elegans for a wide array of toxicity tests including teratogenicity screening, molecular testing, and larval growth assays. We have also found that while NAMs were initially proposed due to concerns of the ethics and sustainability of animal models, alternate models are also faster and cheaper than traditional models. As a result, NAMs can make toxicity testing more replicable and more effective at protecting against harmful substances before they have been mass produced.

This is an exciting time for toxicology research: this year’s Society of Toxicology (SOT) meeting showcased advances in high-throughput toxicology, and the EPA has prioritized this research, awarding nearly $4 million to five research teams last year (EPA 2021; EPA Press Office, 2020). NAMs are already advantageous, but this next generation of models still have great potential for the future of toxicology. 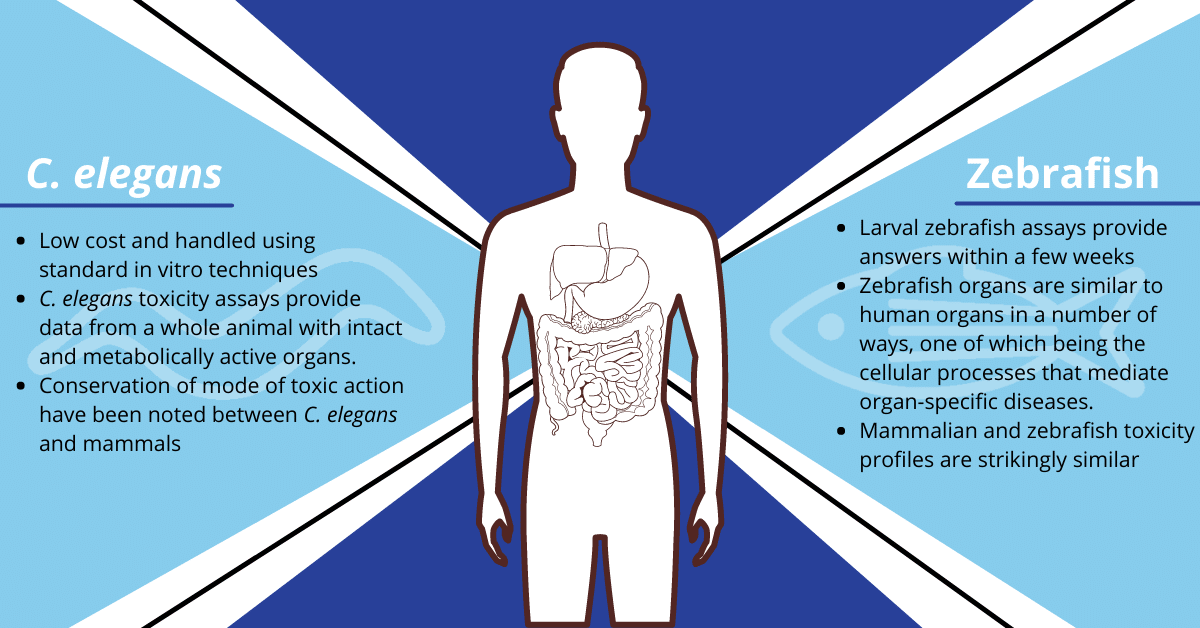 Figure Two. Benefits of C. elegans and zebrafish as alternative model systems for prediction of toxicity.

Alexandra is a technical writer and consultant for InVivo Biosystems. She graduated from the University of St Andrews in 2020 where she earned a Joint MA Honours Degree in English & Psychology/Neuroscience with BPS [British Psychology Society] Accreditation. She has worked as a research assistant, examining the LEC's (lateral entorhinal cortex) involvement in spatial memory and integrating long term multimodal item-context associations, and completed her dissertation on how the number and kinds of sensory cues affect memory persistence across timescales. Her hobbies include running, boxing, and reading.