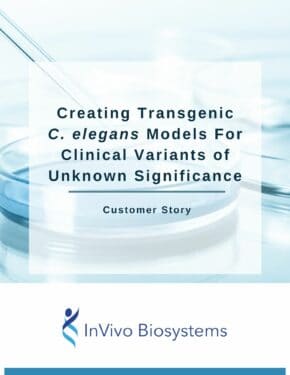 Dr. Dan Starr, a professor at UC Davis, often uses a multimodal approach to his research, which focuses on nuclear positioning in cell and developmental biology. One of his research projects required him to establish and functionally characterize two potential disease-causing variants, LMNA and KLC4.

While genomic data is now widely accessible to clinicians, consequently, there has been a rise in variant discovery. However, the role that these variants play in disease processes is unknown. The Starr & Luxton Labs decided to use C. elegans models to study the two components of the LINC complex, LMNA and KLC4, which are two potential disease-causing variants.

As an officially licensed CRISPR solutions provider, we were able to create the gold standard of human disease models using C. elegans for Dr. Starr's project. We used CRISPR/Cas9 to replace the worm’s gene with its human ortholog, and to introduce the potentially pathogenic variants into the humanized models.

Using the models we created, Dr. Starr and his team were able to focus their efforts on understanding and evaluating the variants and complete their project in a timely manner.