Home > Blog > Alzheimer’s – Have we been approaching it all wrong?

Alzheimer’s – Have we been approaching it all wrong?

A new finding has set the research world abuzz: a 73- year old woman who was extremely high risk for Alzheimer’s, yet did not have the disease (Read the Newsweek article). This woman had a genetic mutation, in PSEN1, that usually coincides with an AD diagnosis by 50 years old, and an extremely high level of abnormal protein clusters between nerves, known as amyloid-beta plaque deposition. Yet, this woman only has mild cognitive impairments that would not qualify as Alzheimer’s Disease (Piore, 2021).

Until recently, the field of Alzheimer’s research largely focused on the “amyloid cascade hypothesis.” This hypothesis states that the first step in Alzheimer’s is the buildup of amyloid-beta plaques which then leads to massive cell death (Piore, 2021). As a result, most of the AD targeted drugs have been aimed at stopping or removing the accumulation of amyloid-beta peptide plaques; but none have had a significant effect on Alzheimer’s (Doody et al., 2013; Kerchner & Boxer, 2010). Finding the 73-year-old has injected new hope into the AD field, as her existence is a strong indicator that the amyloid cascade hypothesis is not the right hypothesis.

Scott Small, Neurologist and director of Columbia University’s Alzheimer’s Disease Research Center put the new finding in context saying, “you’re never going to hit the home run unless you’re in the right playing field” (Piore, 2021). So, is this an apt comparison? What does this 73-year-old woman’s brain scan mean for the direction of future research?

For Fred Gage, President of the Salk Institute, the 73-year-old woman represents a new era of approaching Alzheimer’s. Right now, he says, we are going through a “reexamination of our underlying principles regarding Alzheimer’s disease. The biggest risk for Alzheimer’s disease is age, and we don’t really understand aging very well” (Piore, 2020).

This being said, future research into Alzheimer’s is promising, as new technologies such as CRISPR/Cas9 are enabling scientists to create models of aging that are faster to test, and more comparable to humans. For instance, Zebrafish have been used to study Dysfunctional DNA damage repair and its effect on aging, and biomarkers of aging are being studied in C. elegans (Cayuela et al., 2019; Son et al, 2019). These models will allow researchers to expedite research into new targets of AD pathology, such as the “one in a million” genetic typo that was found in the 73-year old woman by comparing her DNA sequence with those affected by Alzheimer’s. When Fuller and colleagues (2019) reviewed their three decades of research into the 73-year-old woman’s family, a family known for their mutation in the Presenilin1 gene, the researchers noted that further in vivo study is essential to understanding the progression of AD, and what the most effective and stage-specific interventions might be. This is where non-mammalian model organisms can be particularly helpful, providing models that can be easily monitored throughout development with few ethical considerations. 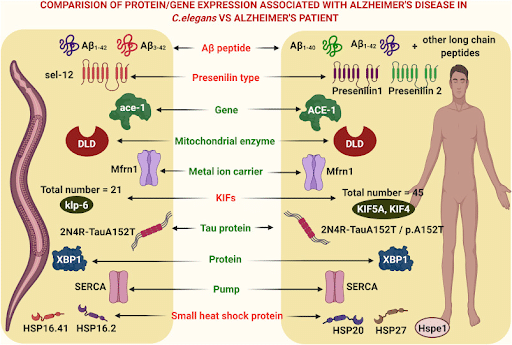 The 73-year-old woman’s genetic typo is just one of over 50 genetic sequences that researchers have identified as promising leads for new drugs (30 of which were identified in 2018 alone) (Piore, 2021). Thus, as we enter a new stage in Alzheimer’s disease research that focuses on bioinformatics, non-mammalian models, with their similarities to human biomarkers and in vivo imaging capabilities, will be powerful tools to further understand, and combat the disease (Paul et al., 2020).