Skip to content
Home › InVivo Biosystems Blog › View from the Bench › How does Cre/loxP recombination work?

Creating a stable genomic edit in zebrafish, or any other animal model system, is a complex process involving sophisticated techniques. Zebrafish gene editing and transgenic reporter lines have played vital roles in studying different gene functions and genetic disorders by inducing edits into genes via Knock-outs, Knock-in, Site-directed mutagenesis (SDM), and tissue-specific overexpression (Gawel K et al., Li M, et al., Patton E, et al ). In this blog, we are going to talk about the basics of the Cre/Lox technique which is used in conditionally controlling gene manipulation in zebrafish.

Cre/lox recombination provides a reliable methodology in achieving gene editing in multiple model systems and it is one of the most effective methods of conditional genetic manipulation. The technique came into play in the scientific community during the 1980s and was later patented by DuPont Pharmaceuticals (Sauer and Henderson 1988; Sternberg and Hamilton 1981).

The Cre-Lox recombination system is derived from P1 Bacteriophages and uses a specific recombinase protein (Cre) that targets a unique DNA sequence (loxP) for splicing. Flanking a DNA sequence with loxP sites allows for the target sequence to be manipulated by Cre using a cyclization mechanism. Depending on the orientation of the loxP cassettes, the recombination between pairs of loxP sites may result in inversion, deletion, or translocation of the intervening DNA sequence (Figure 1,2) but recombination will only occur in the presence of Cre recombinase. As a result, conditional gene editing occurs (Figure 3) (Hans, S et al 2021).

Figure 1: The left figure simply depicts the expression mechanism of the Cre-Lox system by deleting the transgene, and the right figure depicts the confirmation of Cre reporter strains expressing a visible marker such as green fluorescent protein (GFP) after Cre recombinase excises a loxP-flanked stop sequence in a transgenic animal (Kelmenson, 2011).

LoxP orientation matters in deciding the fate of a transgenic edit 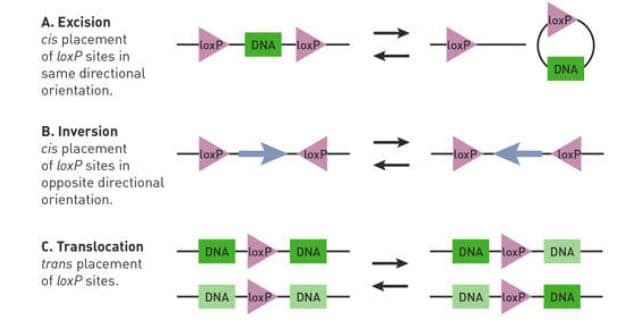 Figure 2: Different orientations of the loxP sites and the resulting product after the cre recombinase activity (JAX Notes, 2006). 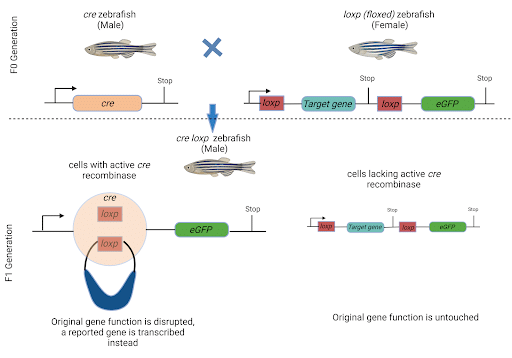 Why Cre-lox recombination is important in Zebrafish

Although Cre-lox recombination has played an important role in mouse genetics since the 1990s, it wasn’t until 2005 that successful Cre-lox zebrafish lines were published (Langaneu et al 2005; Thummel et al 2005). Since then more researchers are looking towards using the Cre/lox system for conditional gene editing. In an effort to help researchers more precisely study gene function and expression in zebrafish, we have been inserting loxP sites and testing for functional recombination here at Invivo Biosystemsusing using multiple methods such as  stable Cre-driver lines and injection of Cre mRNA. Our goal is to help researchers continue to establish the Cre/loxP methodology in zebrafish. This system will be invaluable, especially as the zebrafish model is gaining popularity as one of the most prominent animal models.