Summary: As the zebrafish is increasingly adopted to test drug toxicity, it is critical to systematically assess the parallels between zebrafish, humans and other model systems. In this article, we highlight a recent paper that compares toxicity results obtained in zebrafish and rats. The paper concludes that zebrafish are "valuable for predicting mammalian toxic exposure levels."

At InVivo Biosystems, our expertise and passion lie in the non-fuzzy model organisms. We believe that even though fish and worms are not mammals, they can provide us valuable information and insights for biotechnology development. This is not only because they are typically faster, cheaper, and easier to maintain and genetically manipulate than mice and rats. Nor is it solely because through employing so-called “lower” model organisms, companies and researchers are able to implement the mandates of 3R policies: replace, reduce and refine. Because life on earth is diverse, focusing too much on too few species can be misleading when trying to discover biological truths. When we use mice to the exclusion of all other models, we are entering into a dangerously narrow mental paradigm of believing that we are able to model all human health conditions through close homology with a single mammal. We call this mammalian-centric paradigm the “mouse box”. And yet, mice have proved imperfect models for many human conditions, including neurological disease, even though they are phylogenetically in the same class (1,2,3).

Multitudes of studies have been aimed at breaking down this barrier by empirically examining the relationship between results obtained in mice or rats and alternate model systems. In particular, toxicity and teratogenicity studies are one area where the OECD, an international standards governing body, suggests that zebrafish could be implemented as an alternative to rats. A key component of drug discovery pipelines, toxicity studies are used to ensure pharmaceuticals are safe, and they are equally important in testing industrial compounds to protect ecosystem health. The outcomes of these studies matter greatly in safeguarding our health and livelihoods. Is it really safe to entrust such a thing to a zebrafish when there are mouse and rat models available? Moreover, can dosages between these model systems really be translated and compared?

Cassar et al. (4) did a particularly thorough job in a recent paper of comparing outcomes between rats and zebrafish on acute toxicity and teratogenicity assays. To address these questions, the group selected a list of 25 chemicals that had previously been tested by another group (Datson et. al, 5)  to determine the plasma levels at which they were toxic to rat embryos. They then sent these 25 chemicals for comparative toxicity testing in zebrafish by 6 independent laboratories run by 5 outside companies (AbbVie, Bayer, Charles River, Pfizer, and Sanofi) in order to, as they put it, “evaluate the zebrafish assay for its ability to predict mammalian embryotoxic exposure levels.” These outside companies all differed slightly in their testing protocols, testing between 5 and 13 concentrations of the drugs for their effect on differences in morphology, heart function, and survival rates that are indicative of toxicity.

The authors found that overall, 16 of the 17 compounds found to be toxic in the rat embryo study also were found toxic by all of the sites testing zebrafish dysmorphia. In order to assess whether doses could be compared across species, the authors decided to examine the lowest observed effect concentration (LOEC) for each site and each drug. Overall, they found that the LOECs in zebrafish were within 1-log of the concentrations at which they caused toxicity in the rat embryos. As they put it: “The nominal concentration of the zebrafish assay predicts (within 1-log) rat plasma levels (Cmax) which are toxic to developing embryos.” 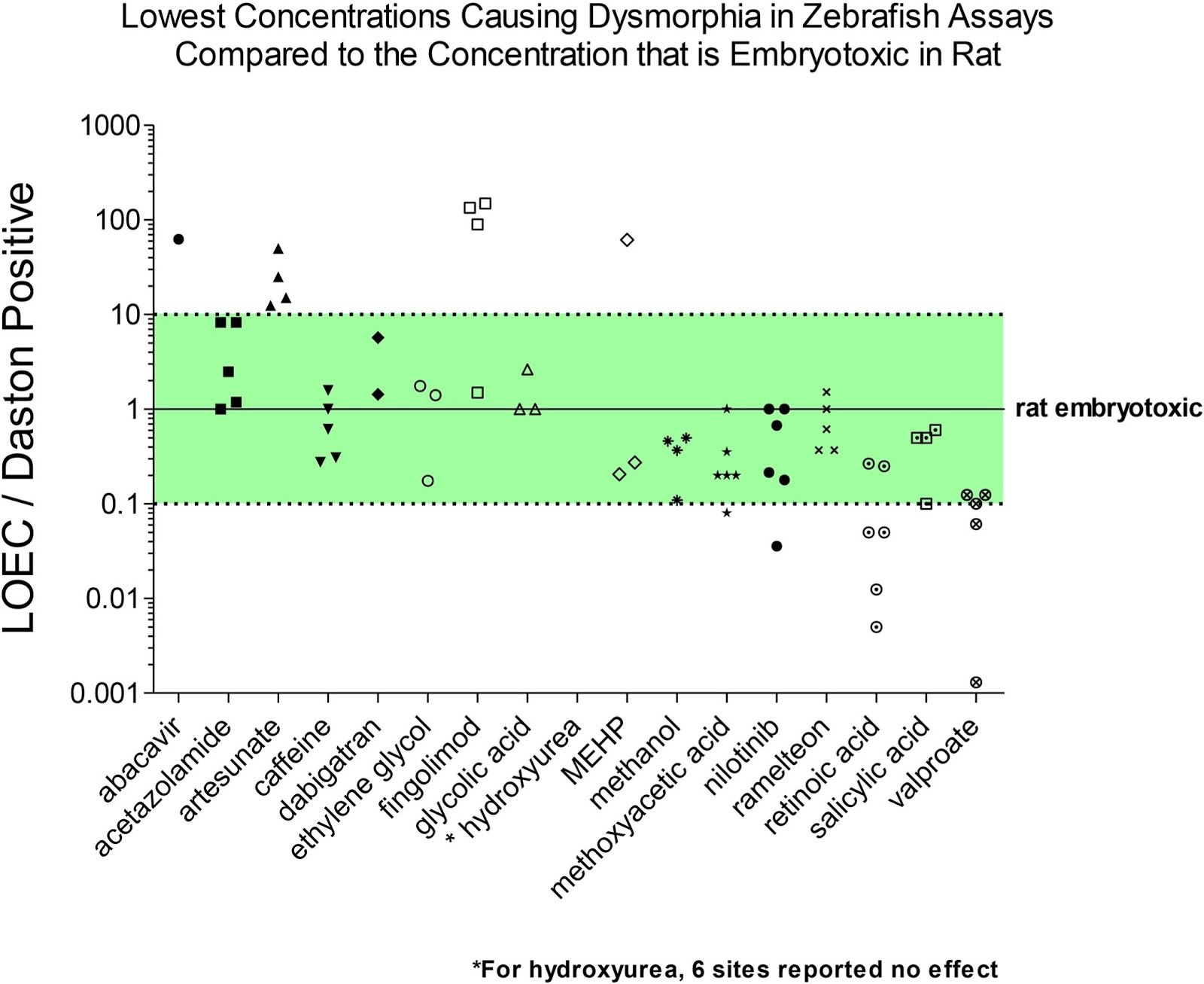 Figure from Cassar et. al, comparing the LOECs found in zebrafish to those found in rat embryos for a battery of drugs.

The authors next examined the absorption of chemicals into the zebrafish relative to the nominal amount put in the fish’s water. As expected, hydrophilic drugs were better absorbed than hydrophobic ones. Interestingly, the absorption data also help provide context to the failures in the LOEC concentrations. The drugs that fell short in the 1-log LOEC comparison were poorly absorbed, or in one case, not absorbed at all. This suggests that hydrophobicity and adsorption are important considerations in deciding whether compounds can be screened for toxicity in zebrafish as a reasonable proxy for mammalian toxicity. As this paper finds: when compounds are well absorbed, zebrafish have high sensitivity and specificity in predicting mammalian outcomes.

One of the conclusions of the paper that was most striking is that these zebrafish studies demonstrated almost as much concordance with the rat studies as inter-site rat studies had with each other. “Developmental toxicity studies involving rabbits and rats demonstrate concordance (effective exposures < 1-log apart) about 80% of the time [46], [47]. Considering this level of concordance, and that the zebrafish assay LOECs were within 1-log of the Daston-positive 75% of the time, it is reasonable to expect that this assay will prove valuable for predicting mammalian toxic exposure levels.”

As the zebrafish is increasingly adopted to test drug toxicity, it is critical that studies like this and others continue to systematically assess the parallels between zebrafish, humans and other model systems. Data like these help to establish what is sometimes referred to as “phenotype anchoring”: the mapping between biological processes and phenotypic outcomes across species (6). Determining where phenotype anchors exist, and to what extent, is essential for understanding which areas zebrafish can serve best as a complementary system to mammalian models for facilitating the advancement of drug discovery and environmental monitoring efforts. The systematic examination undertaken Cassar et al. provides evidence that turning to zebrafish as a predictor of mammalian toxicity is substantiated: in the field of toxicity, the zebrafish have earned their stripes.

About the Author: Kat McCormick, Ph.D (Director of Business Development) 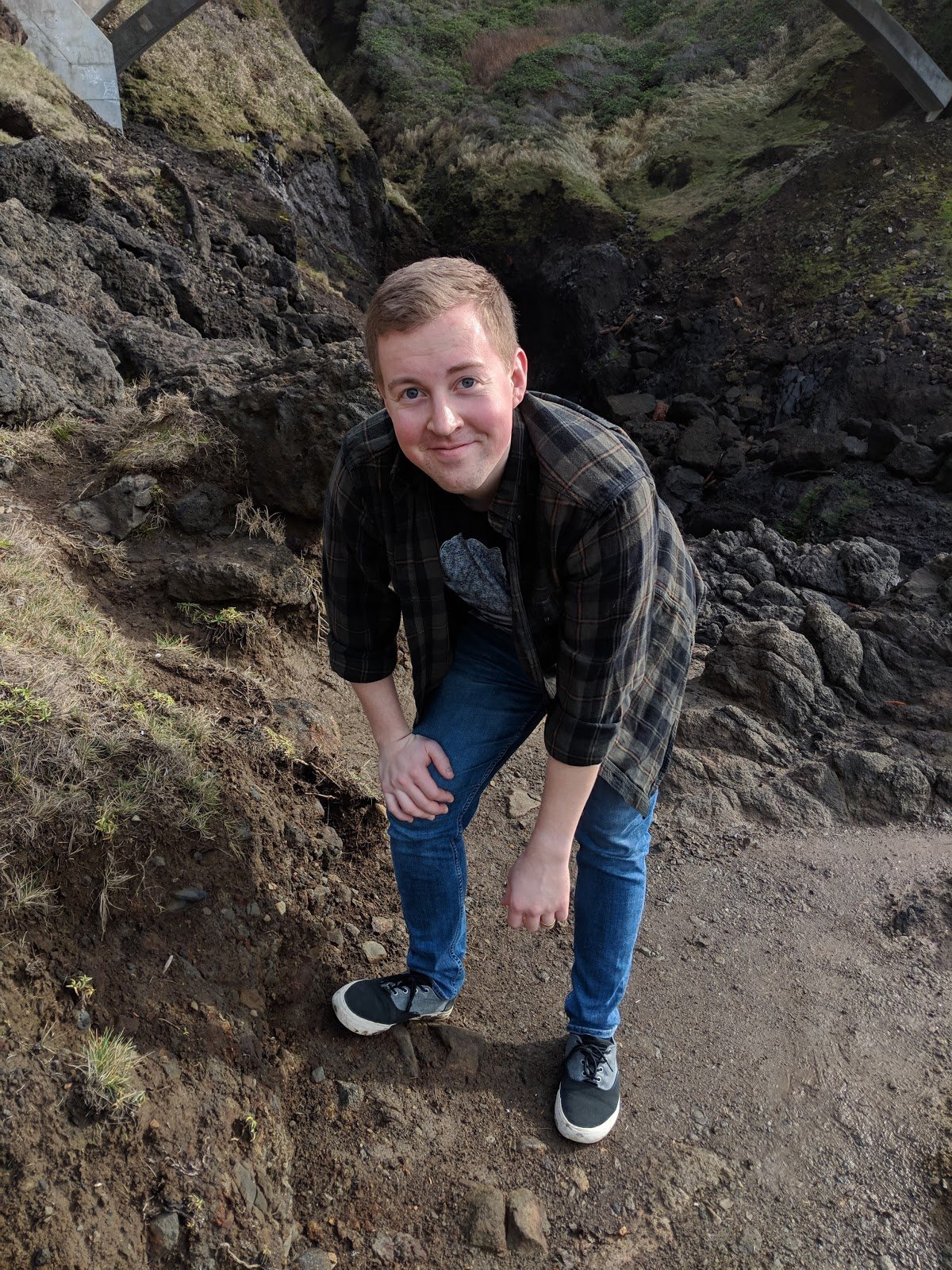 Ben is an R&D scientist at InVivo Biosystems, specializing in genome editing with CRISPR/Cas9 technology in zebrafish. He received his Bachelor of Science from the University of Minnesota in Genetics, Cell Biology & Development in 2014, and worked as a research technician in the laboratory of Dr. Kristen Kwan at the University of Utah prior to joining the InVivo Biosystems team in 2018. Ben is passionate about nature and conservation, and in his spare time enjoys science outreach, field herpetology, his cats, and raising and breeding reptiles and amphibians.