You may or may not know that at InVivo Biosystems, we conduct a lot of grant funded research as well as offering custom models and assays to our clients. Much of our grant activity in the past few years has centered on creating and characterizing disease-associated variants and point mutations. We’ve created collaborations and partnerships with clinicians and researchers to identify genes and mutations that turn up again and again in diseases such as epilepsy, Alzheimers, and more.

Because CRISPR is the best gene editing method for creating small, precise edits, we use it to make all of our point mutations.  We also use it to create “humanized animals”, which are genetically modified to have the human coding sequence for a particular gene, rather than the worm ortholog.  Over the years we’ve been using CRISPR, we’ve refined our methods. We now use Co-CRISPR in almost all of our projects to make finding animals that have the precise edit easier.

As geneticists, we are naturally curious about how efficient CRISPR is. Recently, we took a step back to review the stats on point mutations we’ve created. Here’s a list of our big takeaways about how CRISPR gene editing is working for us:

Figure 1. Target edit frequency in the F1 population. Animals with the co-CRISPR phenotype were isolated. After progeny production animals were harvested and lysed using C. elegans DNA extraction kit. Screening methods were used to identify animals containing the target edit. The percentage of animals containing the edit is indicated in light blue. The percentage of animals that were homozygous for the edit is indicated in dark blue. The dotted line indicates the average edit frequency of 65.7%. Data collected by Preston Kendrick and is also summarized in Table 1 below. 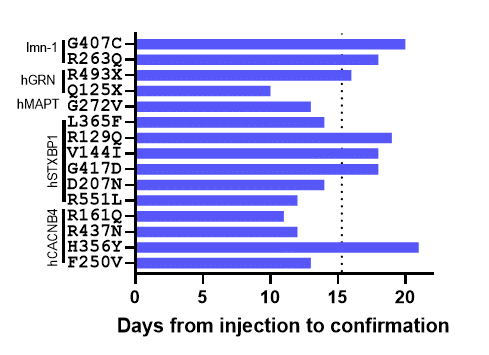 Figure 2. Time to generate homozygous sequence confirmed lines. The days from injection to confirmation is plotted for each project. The dotted line indicates the average time to completion of 15.3 days. 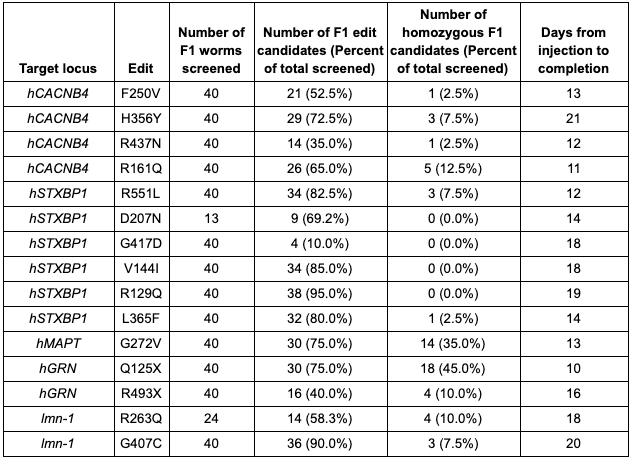 Table 1. Summary of data from Figure 1.