Knock-ins have become invaluable in allowing researchers to better model mutations associated with disease, right down to a single nucleotide change. However, there remain many challenges in knock-in design and differing technical parameters that greatly influence knock-in success. Despite the many studies examining different techniques, there is not a consensus on which parameters are generally ideal for generating knock-ins. In this article we compare and contrast several knock-in methodologies in an effort to inform and help you choose which method may be best for your experiments.

So how do knock-ins work? Continue reading to find out!

Knock-in utilizes a CRISPR/CAS9 system to introduce a repair template containing the genetic sequence of interest. This method typically depends on the process of homology driven repair (HDR) to introduce a precise repair with an exogenously supplied sequence (Figure 1B). First, one or more single guide RNAs (sgRNA) direct Cas9 nuclease to make precise cuts in the genome at the location of the desired edit (Figure 1A). The sequence of interest, flanked by homology arms (sequences complementary to the regions surrounding the edit) then acts as a repair template, replacing the sequence that had been previously excised (Figure 1C). A tag may also be included in the inserted construct, which is a protein marker designed to allow reliable detection of the protein of interest.

There are many design considerations for using this system including both the type of edit to be introduced and the type of template to introduce that desired edit. When it comes to the type of edit, the design is pretty straightforward: researchers look towards the goals for the experiment. For example, epitope tags are often purpose built for detection of specific proteins through downstream applications, while fluorescent tags are commonly desired for following protein behavior in living cells or amino acid changes are used to test protein function or disease related single nucleotide polymorphisms (SNPs).

When it comes to the design of the template itself, things can get a little trickier. The specifics of the design can include which type of repair template to use (such as single or double stranded DNA or viral vectors), homology arm organization and specifications (length and symmetry around edit), and even the question of stranding (e.g. sense vs anti-sense) for single stranded templates. Here we will discuss some of these considerations and compare their respective advantages to determine which parameters may be best suited for your experiment.

Currently there are three types of repair templates receiving widespread use in knock-in editing including: double-stranded DNA (dsDNA) or Plasmid-based templates, short single-stranded DNA (ssDNA), and Adeno-associated viruses (AAVs) (Biswas & Enzmann 2021). Here, we’ll be focusing on dsDNA and ssDNA templates as AAV vectors are primarily used in gene therapeutics rather than in generating stable germline edited animals such as C.elegans or Zebrafish which is our specialty.

Template choice is influenced by several factors with one being the size of the desired edit. For genome edits greater than several hundred base pairs (bp), dsDNA templates are primarily used (Table 1). At this size, production of ssDNA templates can be time-consuming with limited yields using current methodologies or prohibitively expensive and require ordering from dedicated manufacturers to ensure high quality, error-free templates (Iyer et al., 2019).

This increased size of dsDNA template translates to more options for the design of the desired insertion and perhaps a broader selection of tags or reporters. Two examples of dsDNA templates include plasmid-based templates and PCR product templates. For plasmid templates, the sequence of the desired edit is inserted into a plasmid backbone for ease of handling, propagation and microinjection. In addition to the increased cargo capacity of dsDNA templates, plasmid design and production can be done in most laboratories without specialty equipment or procedures that are currently demanded to produce long ssDNA templates (lssDNA) capable of the same cargo capacity (Table 1).

However, plasmid-based templates can result in random, off-target insertion of plasmid DNA into the host genome and have been found to possess higher rates of cytotoxicity than ssDNA template counterparts (Table 1). Despite the lower cargo capacity (on average <200bp), ssDNA templates (specifically single-strand oligodeoxynucleotides, or ssODNs) have demonstrated a greater efficiency in the HDR repair pathway in addition to lower cytotoxicity (Biswas & Enzmann 2021). Synthetic repair templates such as ssODNs have also demonstrated a lower rate of the off-target integration events found in the use of plasmid-based templates (Boel et al 2018).

After selection of the template type, there are further design considerations to be made regarding overall template length, symmetry, and complementarity. The effects of these factors on HDR efficiency was examined by Boel et al. (2018) in which they targeted four sgRNA cut sites within four genes in zebrafish using ssODNs as repair templates. They found that increasing total template length from 60bp to 120bp across templates significantly improved the rate of HDR, while extending the template to 180bp generally resulted in a decrease of integration events. Template symmetry, that is differing lengths of left and right homology arms around the desired edit, and template complementarity to the target sequence were not found to have a significant impact on HDR rates. However it is unclear if this is generally true for all edited loci or specific to the one tested here.

Similar studies have been conducted and have given researchers a more comprehensive understanding of what variables to consider when designing a KI via the described CRISPR/CAS9 system, however template optimization is still hotly debated and limited systematic analysis has been completed, particularly in zebrafish. While there has been a large effort towards improving knock-in efficiency by tweaking knock-in template design, there remains little consensus on what is “best” and knock-in success rates remain frustratingly low, especially in zebrafish where it is common to see only >5% germline transmission rates.

Here at IVB we are exploring how template design can improve knock-in efficiency and have seen great success with introducing point mutations and small cargo such a loxP cassettes, especially in zebrafish where knock-in success can vary greatly from locus to locus.  Given the large variety of genes we are targeting for our clients, we are also starting to identify some of the key design principles that maximize the chances for successful  knock-in for our clients. 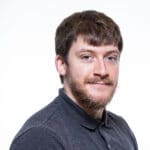 Karl is a Laboratory Technician in the Transgenics Division at InVivo Biosystems where much of his work involves Zebrafish genotyping. He graduated from Allegheny College in 2020 with his Bachelor of Science in Biology where he studied the effects of RNAi knockdown of Arginine kinase (Argk1) associated genes on bacterial load in Drosophila melanogaster via the GAL4/UAS system. Karl enjoys hiking, Powerlifting/Strongman, and playing guitar/violin. 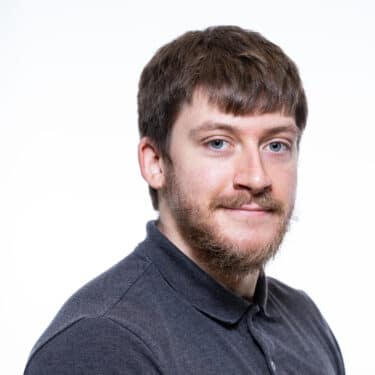 Karl is a Laboratory Technician in the Transgenics Division at InVivo Biosystems where much of his work involves Zebrafish genotyping. He graduated from Allegheny College in 2020 with his Bachelor of Science in Biology where he studied the effects of RNAi knockdown of Arginine kinase (Argk1) associated genes on bacterial load in Drosophila melanogaster via the GAL4/UAS system. Karl enjoys hiking, Powerlifting/Strongman, and playing guitar/violin.
PrevPrevious post
Next postNext