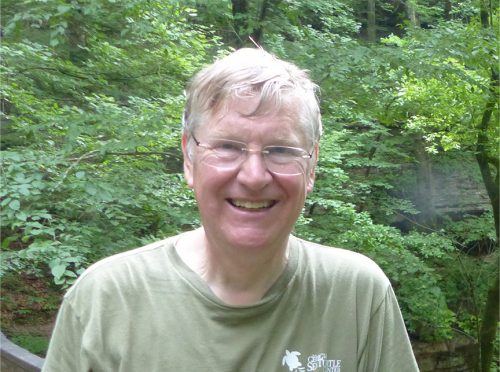 Dr. Adrian Wolstenholme graduated from the University of London with a BSc in Biochemistry and has since spent almost 43 years working in the lab. The first 12 of those years of these were spent studying viruses, before he started the transition into parasitology 30 years ago when he obtained his faculty position at the University of Bath. Dr. Wolstenholme stayed there for 21 years before moving to Georgia in 2009 to work in the Department of Infectious Diseases at the University of Georgia.

His current research focuses on UNC-38, which does not seem to be expressed in the pharynx and the Haemonchus contortus ortholog completely rescues the lev phenotype of the unc-38 knockout. However, this rescue alters the pharyngeal pumping of the transgenic worms (Fig) – why would this be? Does cholinergic transmission at body wall muscle affect pharyngeal pumping?

A comparison of some aspects of pharyngeal pumping between N2 and HMC38/J, a strain in which the unc-38 gene deletion has been complemented by expression of the Haemonchus contortus ortholog under the control of the C. elegans unc-38 promoter. The data were obtained in a single morning at NemaMetrix’ facility in Eugene. Bill Roberts provided the further analysis. Thanks!

When asked what his greatest scientific discovery has been, he humbly acknowledged that we are frequently wrong, which is why science is so important.

A. Favorite book is very hard, but of those that I have read recently, ‘Warlight’, by Michael Ondaatje and ‘Eleonor Oliphant is Completely Fine’ by Gail Honeyman spring to mind.

A:  Almost anywhere I have not been before; of those places I have already visited, Scotland.

Q: What is your favorite thing about the ScreenChip System?

A: Favorite thing about the ScreenChip is that even a PI can generate data in a single morning.

A: Wolstenholme Towne was one of the first English settlements in the Americas, founded in 1618 about 9 miles from Jamestown on the James River. It was badly affected by the uprising of 1622 and abandoned completely after 1645. Sir John Wolstenholme was among the investors in Virginia Company of London, but he had more sense than to actually go there!

Do you have someone you would like to nominate to be a future Featured Scientist? Let us know by emailing us at [email protected]