CRISPR isn’t just a buzz word anymore, in fact the genome-editing tool is probably the single most popular biological tool and fastest growing technique in the field of biology. The tool is being used widely across research areas, from therapeutics to food. One of the trademarks of CRISPR is that it is “easy”, so easy in fact that many people are opting to do CRISPR on their own in order to gain expertise and thinking it will be simple and cheaper to “DIY” the genome-editing than to outsource or work with a third party. But CRISPR isn’t as easy as everyone is led to believe, and recent findings suggest that only 15% of researchers are very satisfied with their results1. This finding, among many others, were recently published in the CRISPR Benchmark Report: An Inside Look at What’s Happening at the Benchtop released by Synthego.

Synthego’s aim with the report was to understand who is doing CRISPR, what challenges they face with their current work, and if they find their work with CRISPR to be worth it.

So, is DIY-ing CRISPR worth it?

In Synthego’s study, they found the average CRISPR project took 106 hours to complete and cost ~$4,336.31, which doesn’t sound too bad, but this is if the project only requires 1 attempt.

In reality though, most researchers have to restart their CRISPR project an average of 7 times1, meaning the true cost of DIY-ing a CRISPR project is far greater than one may be led to believe. In fact, if a CRISPR project needs to be attempted more than once, the time and monetary costs begin to skyrocket, and may far exceed the resources that had been estimated for the project. According to Synthego’s study, it really doesn’t take much for a project to go off course, in fact  “even a small misstep in any part of the CRISPR workflow results in failed or delayed experiments”1, which results in larger time and cost investments for the project to reach a successful completion.

For example, if a researcher plans to do a candidate lines project, they may look at the of ~$4,300 and think it makes sense to learn CRISPR and do it on their own. The injections are simple and they already know how to do the screening. One of the most difficult aspects of a CRISPR project though is the design – if the design is even slightly off and a project begins without the correct guide RNA, the entire project will need to be restarted. The unfortunate part is that this will not become obvious until after the project has run its course and the researcher is analyzing the results, meaning they have already invested on average 10 weeks into this project and will now need to restart.

When asked how important “mastering” CRISPR is, 68.2% of academic researchers and 62.7% of industry researchers responded that it is very important to them1. That being said, many researchers are racing the clocks already to meet deadlines and publish their findings, so taking the time to learn an extremely difficult tool like CRISPR might not be the best use of their time and resources, especially knowing they likely aren’t going to get it right on the first go. So despite being motivated to learn how to DIY CRISPR, an average of 71% of researchers across both the academic and industry sectors said they would be willing to outsource their CRISPR projects1.

While the upfront costs of outsourcing CRISPR projects may seem higher than learning CRISPR and doing it in your own lab, the reality is that using a third party is the most cost and time effective way to perform CRISPR.

According to the Synthego report, knockout experiments are the most popular CRISPR editing type researchers wish to DIY. Using the candidate lines example again, if a researcher opted to go with NemaMetrix for their knockout candidate lines, their project would begin at $2,554* and take an average of 3-4 weeks to complete. This already is saving the researcher almost $2,000 and over 6 weeks of time as opposed to doing it in their own lab. And that is comparing the time and costs to the researcher only requiring 1 attempt to perform their experiment, when we know that it takes an average of 7 attempts to get the desired results1.

Another item to note is that CRISPR is a licensed tool2,3. This means that, depending on the type of research being performed, labs using CRISPR may need to obtain a license to use the technology4. This adds an additional cost and time component into the already lengthy and expensive process of DIY-ing CRISPR in one’s own lab.

Outsourcing your CRISPR projects to a company such as InVivo Biosystems is an efficient way to complete your CRISPR project. We work with researchers everyday to design, inject, screen, and every step in between. We are experts in CRISPR and can help you to meet your research needs in a timely and budget-friendly manner. In addition, InVivo Biosystems is an officially licensed CRISPR provider, which means that working with us will help you to avoid any problems with your legal department. 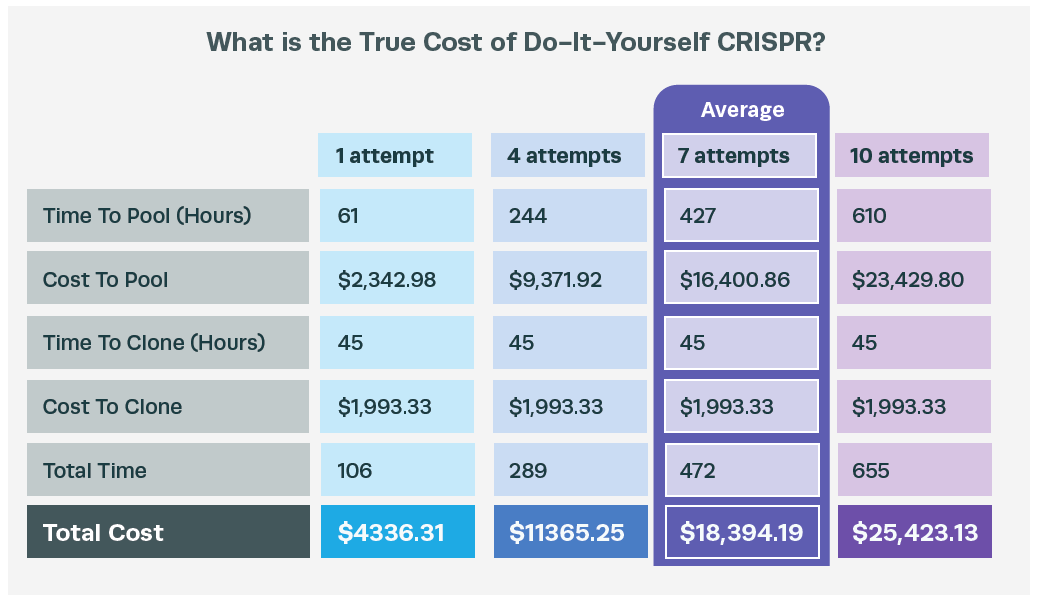 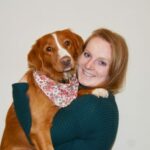 Hannah is the Marketing Manager at InVivo Biosystems. She received her Bachelor of Science in Science & Management specializing in Biotechnology from Scripps College in 2017. She has been with InVivo Biosystems since June of 2018. Outside of work Hannah coaches youth soccer and enjoys being active and outside with her dog, Siri. 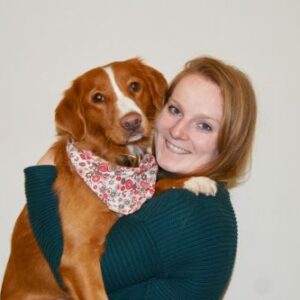 Hannah is the Marketing Manager at InVivo Biosystems. She received her Bachelor of Science in Science & Management specializing in Biotechnology from Scripps College in 2017. She has been with InVivo Biosystems since June of 2018. Outside of work Hannah coaches youth soccer and enjoys being active and outside with her dog, Siri.
PrevPrevious post
Next postNext