Home › In Vivo Solutions › Our Approach

The drug discovery process for researching and developing new medicines is growing in difficulty and length. On average, it takes at least ten years and with an estimated average cost of billions of dollars to bring a new medicine to market1,2. The human and financial cost of failures is enormous due to the fact that thousands and sometimes millions of compounds may be screened and assessed early in the R&D process, but only a few will ultimately receive approval. For early-stage biotech and pharma companies, the return is even lower because they don't have many compounds to screen.

A recent study of approved drugs revealed that Target-based Drug Discovery, or TDD, is underperforming relative to Phenotype-based Drug Discovery, or PDD. PDD focuses on ameliorating phenotypes to discover efficacious drugs, whereas TDD focuses on interactions with pre-identified drug targets. Looking broadly back over the past two decades, the PDD approach has resulted in twice as many approved new drugs as TDD3.

Small and large pharma companies can benefit from broadening their PDD programs. By focusing on the phenotype, efficacious drugs are identified more quickly and readily, costing less time and money.

Our Phenotype-based drug discovery (PDD) process utilized powerful small animal models including zebrafish and C. elegans to reduce the cost and speed up the process of identifying lead therapeutics. This process is particularly well suited for:

In target-based drug discovery, pharma companies work from pre-identified targets to screen compounds in vitro. An in vivo, phenotype-based model is created and tested only after several rounds of basic in vitro optimization to ensure the drug is interacting with the target.

Drug development is slowed by the very large biological space between in vitro models (which suffer from oversimplification, aneuploidy, and contamination) and murine models (which are expensive and have long timelines to experimentation).

Often, this approach fails because it presupposes a more complete understanding of disease mechanisms than we actually have.

Our phenotype-based drug discovery process uses small model organisms to bridge the gap between cell culture and murine models. Using these powerful in vivo models, drug discovery can be target independent and results based from the very start.  And, because of advances in genetics allowing us to reliably express human proteins these models are more translational than ever before.  Even human variants of uncertain significance (VUS) can be appropriately modeled and functionally analyzed using an in vivo system.

The phenotype-based approach has delivered twice as many as approved small molecule drugs compared to the target-based drug discovery approach3.

Two of our most common services include:

Testing new compounds and formulations to understand whether they are functionally effective on disease phenotypes.

Other Services and Testing

We also perform other specialized testing and analysis including:

Data example: By combining a highly sensitive larval growth assay with a highly selective egg viability assay, we can refine the pool of possible compounds or dosages to those least (or most) likely to be toxic. 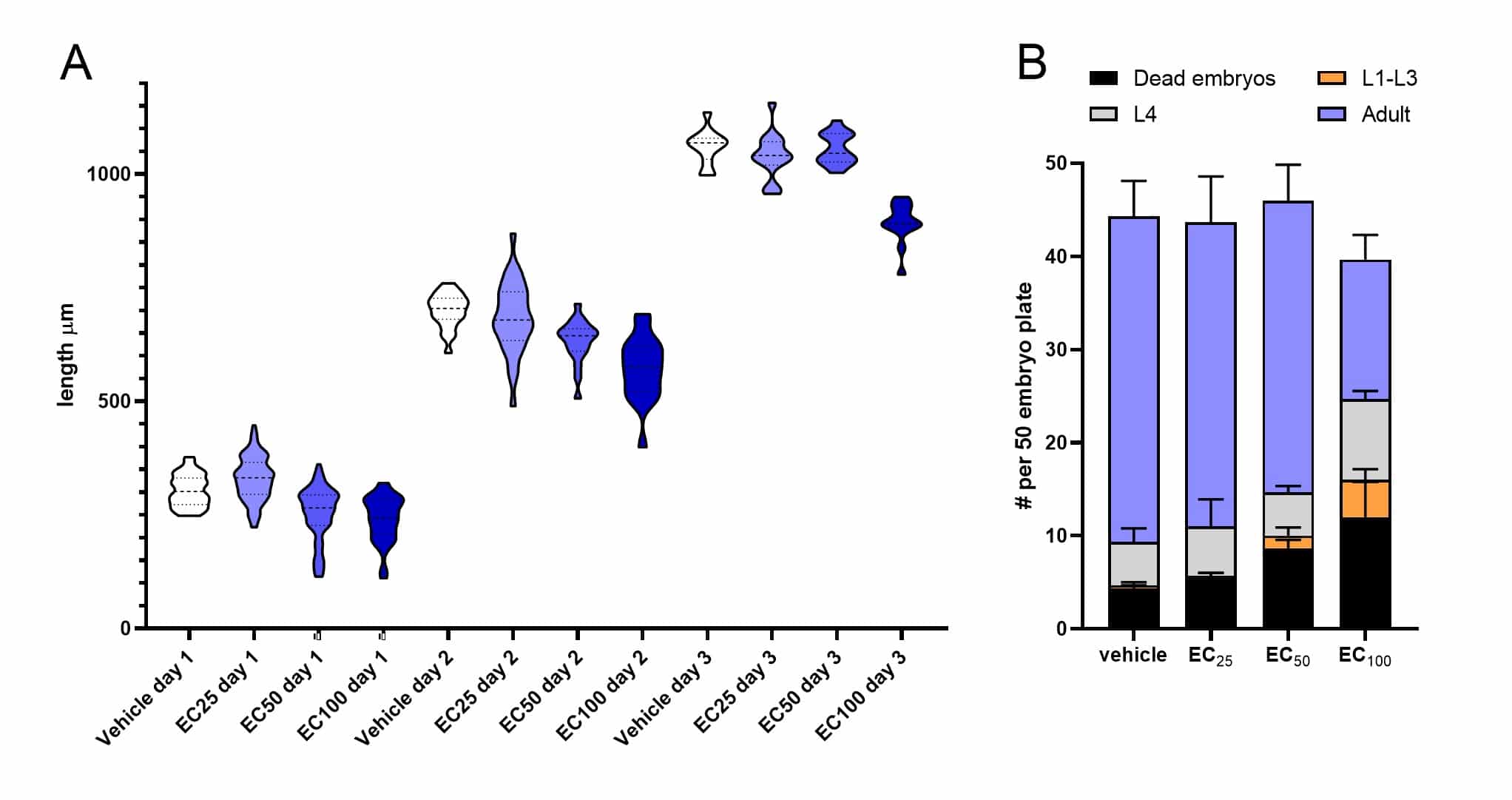 Learn more about our In Vivo Toxicity Testing. 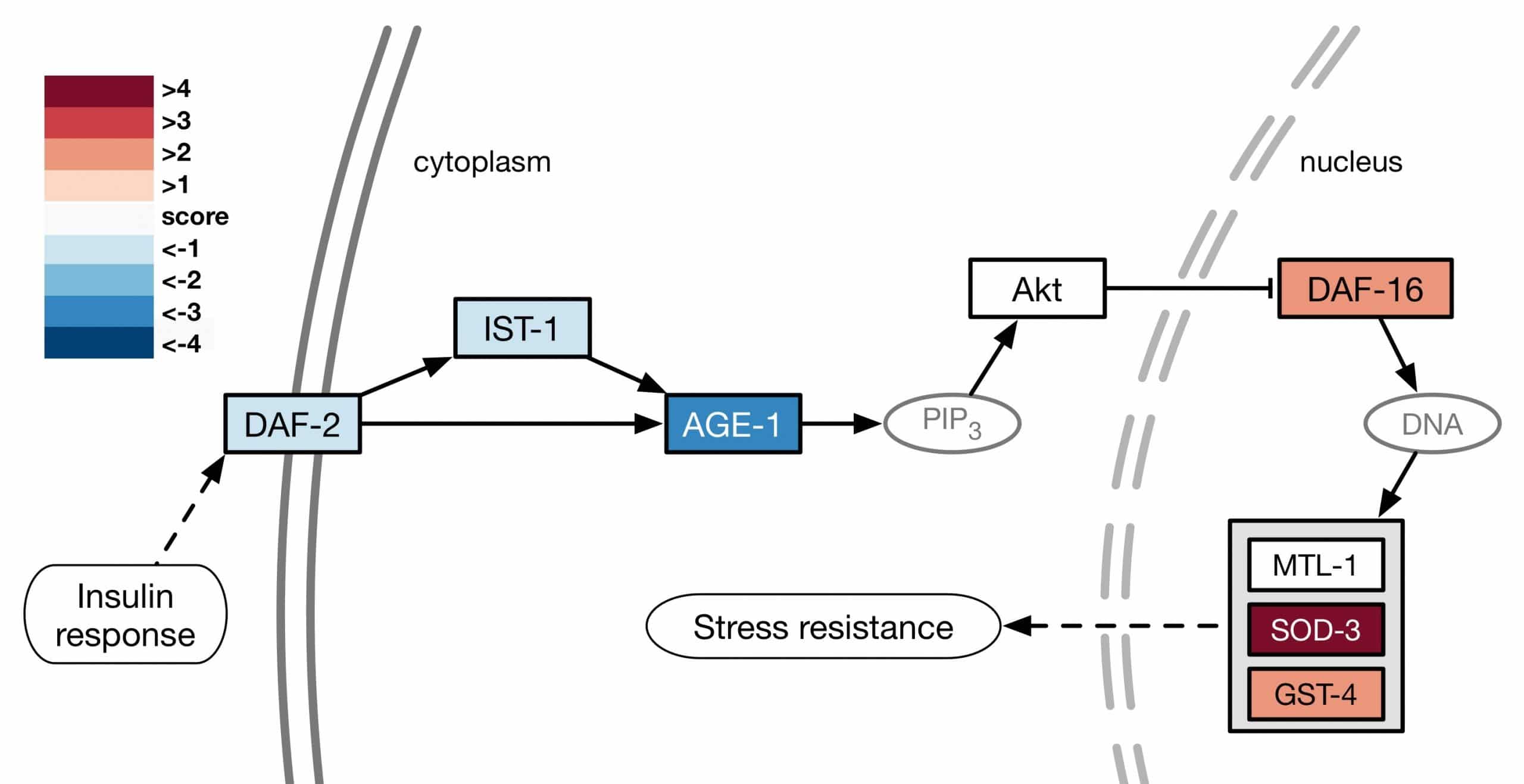 Mapping of gene expression data to longevity pathways in the KEGG database. Pathway shown represents changes of expression that might be observed under conditions of dietary restriction. Pathway components are color coded based on the level of up or down regulation of treated samples versus control.

Learn more about our Lifespan and Healthspan Analysis.

We want to work with you!

Do you have a novel idea and need data quickly? Let us know what you’re working on and we will work with you to create a custom in vivo design to get you the answers you need.

Start Your Inquiry
Scroll to Top