Home > Blog > From ED to AD: a drug repurposing success? How a performance-enhancing drug is giving insight into dementia

From ED to AD: a drug repurposing success? How a performance-enhancing drug is giving insight into dementia

Recently, researchers at Cleveland Clinic’s Genomic Medicine Institute published an article in Nature Aging which has caused quite a stir in the medical community and media – in the article these researchers report that an analysis of  over 7 million people, spanning six years, found that those taking the Erectile dysfunction (ED) drug sildenafil (marketed as Viagra) were 69% less likely to develop Alzheimer’s disease (AD). This being said, there are some important caveats to this study – and so, although media reports on this study include lines such as “the little blue pill could soon be prescribed to tackle dementia”, more realistic implications should be the takeaway (but not less exciting!).

As we’ve discussed in a previous article, drug repurposing (applying FDA-approved compounds to conditions they weren’t developed for) is a promising and important strategy for identifying therapeutics as it reduces time frames, decreases costs, and improves the success rates of drugs. This month researchers at Cleveland Clinic’s Genomic Medicine Institute published a study in which they used a computer methodology to screen over 1,600 FDA-approved compounds for therapies which could treat Alzheimer’s Disease (AD). The team defined ‘an effect AD treatment’ as a therapy which would target the two main hallmarks of the disease: amyloid plaques and neurofibrillary tangles (caused by the build-up of beta amyloid and tau proteins) [Figure 1]. 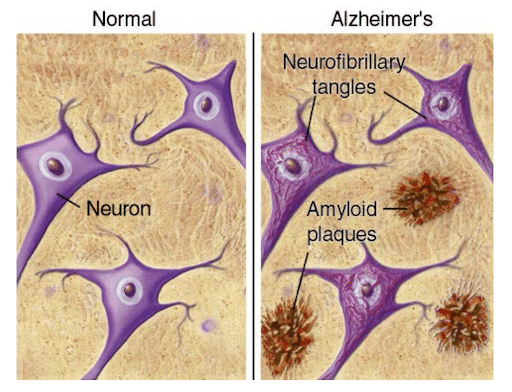 With this definition the team of researchers identified 66 drugs and came to a surprising discovery: taking sildenafil (the generic version of Viagra) was associated with a 69% reduced risk of developing AD across 7.23 million people after a six year follow-up.

Interestingly, Viagra itself is an example of drug repurposing as it was initially developed as a heart drug – to improve blood flow by relaxing/widening blood vessels and its ED application was discovered by accident.

Table 1. Sildenafil users compared to users of other drugs (both drugs hypothesized to target AD, and drugs with no known association to AD).

While the media has hailed sildenafil as a new potential treatment, some doctors are putting on the brakes, “there are several important limitations to consider” says Professor Tara Spires-Jones, Deputy Director of the Centre for Discovery Brain Sciences, University of Edinburgh. Specifically, Spires-Jones notes the lack of information on the population’s risk genes, and their socio-economic status (sildenafil is more commonly prescribed to higher income individuals). Spires-Jones also emphasized the correlation not causation nature of this study, describing one scenario which could show the same results but in which sildenafil is not an effective therapy for AD: “brain changes start decades before dementia symptoms and it is possible that these early Alzheimer’s changes reduce sex drive (and make people less likely to use an ED drug).”

“While these data are interesting scientifically, based on this study, I would not rush out to start taking sildenafil as a prevention for Alzheimer’s disease” – Professor Tara Spires-Jones

Furthermore, this study mainly consisted of men which make up the minority of AD cases (36%) and, as recently noted, drugs may have different effects on different sexes.  The researchers behind this recent publication are currently planning a mechanistic trial and Phase II randomized clinical trial, which will help clarify the results of this associative finding. The researchers also hope to expand this type of study to other neurodegenerative diseases such as Parkinson’s disease. In the meantime, this study has made an important impact – encouraging others to adopt a drug repurposing approach, and potentially an insight into the mechanism of action behind AD. These small steps are invaluable as AD is a prevalent, debilitating condition which still lacks an effective treatment.

Alexandra is a Content Marketing Specialist and Grant Writer for InVivo Biosystems. She graduated from the University of St Andrews in 2020 where she earned a Joint MA Honours Degree in English & Psychology/Neuroscience with BPS [British Psychology Society] Accreditation. She has worked as a research assistant, examining the LEC’s (lateral entorhinal cortex) involvement in spatial memory and integrating long term multimodal item-context associations, and completed her dissertation on how the number and kinds of sensory cues affect memory persistence across timescales. Her hobbies include running, boxing, and reading.