In the USA alone over 100 million people suffer from a neurological condition, many without adequate treatment. For instance, while there are over 30 antiepileptic drugs on the market, 30-40% of epileptic patients find these medications don’t help control their seizures (Mao, 2020; Wood, 2019). Developing new drugs, however, is costly and time consuming – especially for central nervous system (CNS) therapies which have a notoriously high failure rate (Butlen-Ducuing et al., 2016). Alternatively, drug repurposing (i.e. finding novel uses for existing drugs) can be used to help provide better, much needed therapies.

Drug repurposing: What is it?

Drug repurposing (DR) is a strategy that enables previous research to not sit underutilized. Instead, previous findings can be applied to different diseases. There are two approaches to drug repurposing: on-target and off-target. On-target drug repurposing is when the repurposed drug acts on the same biological target as the original drug but is applied to a different disease.  Off-target, on the other hand, is when the repurposed drug is aiming to have a therapeutic effect, but its pharmacological mechanism is unknown. [Figure 1] (Clout et al., 2019; Rudrapal, Khairnar &  Jadhav,  2020). An example of a successful on-target drug repurposing campaign is the drug Minoxidil. Minoxidil was developed to treat high blood pressure, but is now sold to treat certain types of baldness – because the drug works by opening potassium channels and widening blood vessels, which improves blood flow, but also gets more nutrients to hair follicles (Bryan, 2011). Aspirin, however, is an example of an off-target drug as it is used to treat a variety of afflictions without its ability to produce an effect being fully understood.

Regardless of whether these repurposed drugs are discovered serendipitously, through computational screening, or through targeted experiments, being able to optimize already developed drugs is very valuable. Drug repurposing makes it more likely that better therapies will be found. Moreover, drug repurposing can facilitate the discovery of rare disease therapies, because drugmakers consider developing a new drug for rare diseases to have a bad risk-reward ratio: too costly for the small number of people the drugs would affect. With this in mind, policymakers in the USA and around the world, have tried to promote drug repurposing by creating incentives, such as giving a drug company market exclusivity for the repurposed drug (3 years for most drugs, and 7 years for rare disease drugs) (Sahragardjoonegani, et al. 2021). 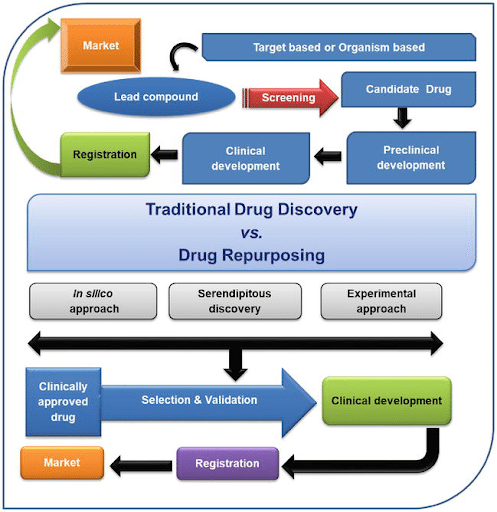 What are the advantages of drug repurposing?

Figure 3. The typical pipeline for getting a new drug to market compared to a repurposed drug (Clout et al., 2019).

It has been reported that, on average, it costs $500 million to bring a new drug to market, and 7-10 years (Ogbru, 2020). When drugs are repurposed, however, total development costs can be reduced by 50% and their time frame can be cut significantly (Bauzon, Lee & Cummings, 2020). Why is there such a staggering difference? The main reason therapies fail during development is because they don’t pass safety guidelines, but since drug repurposing uses FDA-approved drugs that have already undergone human trials, they are already proven to be safe. Repurposed drugs have the advantage of already going through the preclinical, and Phase 1 steps of drug development where efficacy, toxicity, tolerability, and pharmacokinetics are thoroughly tested [Figure 3] (Clout et al., 2019). This allows repurposed drugs to bypass these stages in the development pipeline, saving both time and money. Furthermore, repurposed drugs have a better chance of making it to market: while ~10% of new drug applications gain market approval, ~30% of repurposed drugs are approved (Hernandez et al., 2017). These numbers show just how impactful repurposing can be – building upon previous research repurposed drugs can gain a speedy, and often more successful, review by the FDA. It is worth mentioning that just because a drug has been repurposed does not mean that it has failed its original intention. In fact, many drugs are currently being utilized as therapies for multiple diseases, for instance adalimumab (Humira) was originally approved with one purpose and now has ten, and onabotulinumtoxinA (Botox) was approved for two uses and has nine current uses (Sahragardjoonegani et al., 2021).

How does it work for finding neurological disease therapies?

Some disease research fields have adopted drug repurposing more widely than others. For instance, repurposing is popular in Neurological and Psychiatric disorder research, with repurposed drugs accounting for 39% of all drugs currently being developed to treat Alzheimer’s disease (AD) (Bauzon, Lee & Cummings, 2020). Neurological diseases include: neurogenetic diseases (such as Huntington’s disease and muscular dystrophy), developmental disorders (such as cerebral palsy), degenerative diseases of adult life (such as Parkinson’s disease and Alzheimer’s disease), metabolic diseases (such as Gaucher’s disease), and convulsive disorders (such as epilepsy), just to name a few (NIH, 2021). The high number of repurposed drugs in neurological disease research can partially be attributed to how attractive the financial advantages are for drug repurposing because, as previously mentioned, CNS drug development has a high failure rate. However, the popularity of the repurposing approach is predominantly due to how the field of neurology has developed. Historically, neurological disease research and diagnosis has relied on a person’s disease attributes (the clinical phenotype) without fully understanding the processes behind them (Clout et al., 2019). Because of this, therapies for neurological diseases took an off-target approach, treating the symptoms of the disease without a thorough understanding of the underlying mechanisms, which often led to unintended side-effects. While that can sound alarming, it is actually very beneficial in disease research: this lack of specificity in the drug’s target allows these therapies to treat other disorders in the same therapeutic area (Clout et al., 2019).

As advances have been made in our understanding of how genes impact disease, more researchers have begun applying an on-target approach to neurological and psychiatric disorder research.. Studies of co-expression networks and genome-wide association studies have revealed how many disease-associated genes are shared between these disorders [Figure 4] (Lüscher Dias et al., 2020). A repurposing drug strategy, whether on- or off-target, works particularly well for neurological diseases because there are over 600 kinds of neurological diseases, all with related phenotypes and genotypes. 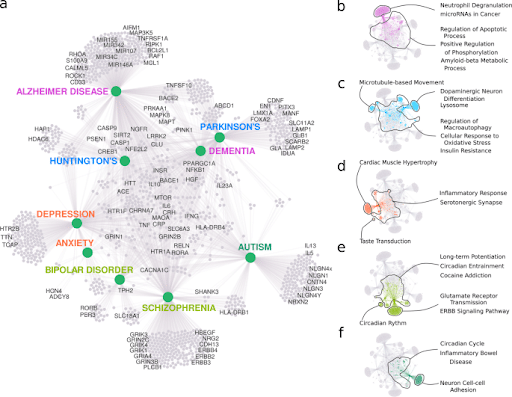 Figure 5. (a) A summary of genes connected to PNDs enriched for relevant biological processes (GO) and pathways (KEGG). (b-f) The most significant gene enrichment categories for genes in the modules: (a) Alzheimer’s and dementia (b), Huntington’s disease and Parkinson’s disease (c), depression and anxiety (d), schizophrenia and bipolar disorder (e), and autism (f).

An example of a successful repurposed drug campaign for neurological diseases

Recently, the biotech Perlara conducted a successful repurposing campaign: using the drug Epalrestat to treat the congenital disorder PMM2-CDG in a little girl, Maggie. PMM2-CDG falls under the umbrella classification: ‘Congenital disorders of glycosylation (CDG)’, which is a group of over 130 rare metabolic disorders that present a variety of symptoms but commonly have a significant neurological component (NORD, 2021). Notably, the number of patients with a CDG is rapidly increasing. PMM2-CDG specifically affects around 1,000 people worldwide, and while this may seem like a small patient population, it is actually the most common (CDG) (Lyer et al., 2019).

Perlara, a biotech company based in the Bay Area was working on a different glycosylation disorder (NGLY-1) when they were introduced to Maggie’s parents. Perlara seeks to find cures for rare genetic diseases and the mechanisms behind drug therapies, and so the collaboration between Perlara and Maggie’s Cure (the company Maggie’s family started to find a cure) seemed a perfect fit.

Perlara initially used a yeast model of PMM2 for testing, but wanted to create a more precise model using C. elegans. That is when Perlara approached InVivo Biosystems – our team was able to create a C. elegans model with high similarity to humans, and conserved mutation sites between worms and humans.

Equipped with robust models of PMM2 Maggie’sQuest was ready to begin searching for a cure using a drug repurposing approach. The gene-edited model organisms, and patient fibroblasts, were tested with known drugs and compounds, and they found promising results from Epalrestat.

Epalrestat is a Japanese drug developed in 1992 and used in Japan (never used in the USA) to treat diabetic neuropathy and retinopathy, most commonly in geriatric patients (Maggie’s Cure, 2020; Calabek, Callaghan & Feldman, 2014). Despite this original use, the Perlara team found that Epalrestat also increases enzyme activity. Maggie has now been taking Epalrestat for over a year with no noticeable negative side effects, but with significant improvements in her stability, strength, gross and fine motor skills (Maggie’s Cure, 2021). A 30-patient clinical trial (ages 2-17) began in Spring of 2021.

The benefits of drug repurposing speak for themselves and are compelling enough that there has been an increase in the number of repurposed drug trials over the past few years: from 2016 to 2020 repurposed drug trials increased 89%, with the rate increasing each year (23% between 2019 and 2020) (Bauzon, Lee & Cummings, 2020). However, there is still a long way to go before repurposing becomes industry standard. Despite the incentives mentioned earlier, two-thirds of drugs are never considered for repurposing (Sahragardjoonegani et al., 2021). And the amount of drugs that are repurposed after the drug is sold commercially (generic entry) is close to zero. This indicates that “the status quo for most drug makers is creating novel one-indication products”, which, while unfortunate, shows a clear way in which improved incentives can increase drug repurposing numbers (Sahragardjoonegani et al., 2021).