Five months into the COVID-19 pandemic, the world is at 29,119,433 confirmed cases of SARS-Cov2 infection, including 925,965 deaths (6 August 2020 https://covid19.who.int/), which is over 3% of the planet’s human population. Of all the persons infected with the virus, 3.2% have died. If COVID-19 pandemic follows the trajectory of the 1918 influenza, 1/3rd of the world population will become infected [1], and nearly 300 million deaths will occur in the next few years. To put it in perspective, that is more than twice the number of military and civilian casualties of World Wars I and II combined. The medical community is challenged in optimizing their response due to a highly diverse array of infection severity in the human population. Some individuals are asymptomatic but test positive for SARS-CoV-2 infection, while other exposed individuals experience severe, sometimes fatal COVID-19 infection [2–4]. Disease severity heterogeneity is in part due to patients with underlying health conditions or comorbidities such as hypertension and diabetes which we believe share a common pathophysiology of renin-angiotensin system (RAS) [5]. Estimates for the number of people with an underlying condition for increased severity risk of COVID-19 are 1.7 billion persons (22%) [6]. As a result, there is an urgent need to understand the common molecular and cellular pathophysiologic basis of patients with a diversity of comorbidities and identify those with a rare disease that are at high risk for clinical deterioration. Therefore a rare human disease may be the perfect physiologic model to better understand the disease and generate more individualized therapeutic medical responses and positive outcomes for higher risk COVID-19 groups.

There is emerging evidence that RD patients have higher COVID-19 infection risk among all human populations. For example, patients with deficiencies in cellular chloride transport due to CFTR variants associated with Cystic Fibrosis (CF) are more prone to viral and bacterial infection [7]. Yet, because COVID-19 is a newly emergent disease, clear correlation of outcomes in SARS-CoV-2 infection in CF are extremely limited in infected CF patients [8,9] but the concern remains high for these patient groups [10]. Another RD group that is likely to be negatively influenced by SARS-CoV-2 infection, are patents with CADASIL. CADASIL (Cerebral Autosomal Dominant Arteriopathy with Subcortical Infarcts and Leukoencephalopathy) is caused by genetic lesions in the extracellular domain in NOTCH3 [11]. Like CF, CADASIL appears to be linked to accelerated disease progression via Influenza virus infection [12]. Yet the co-morbidity of SARS-CoV-2 infection with NOTCH3 pathogenic variations is only speculated to be associated with advancing CADASIL presentation [13]. Clear evidence is needed in order for a pathological association between COVID-19 infection and CADASIL is supported or refuted. With this knowledge, appropriate therapeutic medical responses can be identified.

The Renin-Angiotensin System (RAS) is at the center for controlling severity of COVID-19 infection.

SARS-CoV-2 utilizes binding of ACE2 to gain entry into host tissues [14]. The resulting internalization and attenuation of ACE2 enzymatic activity is potentially a significant contributor to COVID-19 disease severity. ACE2 is a critical negative regulator of angiotensin activity. Overactive RAS signaling is implicated in higher risk for cardiovascular [15], renal [16,17], and neurodegenerative [18] disease and diabetes [19]. Angiotensin I (Ang I) signaling peptide is produced from the angiotensinogen precursor by the proteolytic activity of renin. In the canonical RAS signaling pathway, Ang I is catalyzed into Ang II by the ACE dipeptidase. Ang II peptide can bind two GPCR receptors AT1R and AT2R with opposing effects. Ang II, a high affinity agonist of the AT1R receptor, promotes inflammation, apoptosis and vasoconstriction, which often results in hypertension of the patient. The agonist activity of Ang II at AT2R receptors has an opposite effect of being anti-inflammatory, anti-apoptotic and vasodilating, which are activities that lead to lower blood pressure. The expression levels of these receptors will have profound influence on hypertension in tissues as well as the presence of Ang II metabolites. Ang II is catalyzed into Ang III by an amino peptidase that remove the N terminal asparagine and results in a molecule with increased affinity for the AT2R receptor and thus activates anti-hypertensive activity [20]. Additional control of the hypertensive state is achieved via the ACE2 dipeptidase which catalyzes Ang I into Ang 1-9 and Ang II into Ang 1-7. Ang 1-9 acts as agonists of the AT2R receptor. Similar to the anti-hypertensive activity of Ang 1-9, the Ang 1-7 peptide also promotes hypotension but through agonist activity on a different GPCR, the MasR receptor [21].

SVD, defined as “perforating arteries, arterioles, capillaries, and venules” is currently associated with 20% of stroke and 40% of dementia [22]. ACE polymorphisms have been associated with stroke-associated white matter hyperintensities [23] and ischemic stroke [24]. CADASIL is one of the most common single-gene disorders causing cerebral SVD [25]. Hypertension is a risk factor for SVD [26] and leads to vascular remodeling [27]. Since Ang II leads to vascular remodeling via VSMC dedifferentiation [28,29], it becomes plausible that CADASIL variants in NOTCH3 participate in generalizable VSMC remodeling of SVD via altered RAS signaling activity which may predispose these patients to a hypersensitivity to COVID-19 infection. Yet direct evidence is lacking that CADASIL-associated NOTCH3 variants have altered RAS signaling activity that leads to higher viral infectivity and/or RAS stress response. 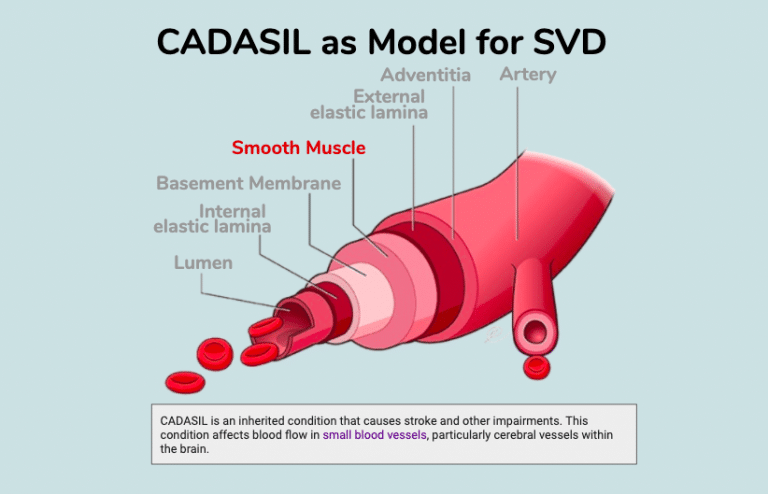 The zebrafish animal model is well suited to modeling CVD and CADASIL.

The zebrafish model organism is one of the fastest growing animal models. Walcot and Peterson have proposed zebrafish are a good model for cardiovascular disease due to “its morphological and physiological similarity to human cerebral vasculature, its ability to be genetically manipulated, and its fecundity allowing for large-scale, phenotype-based screens” [30].  For instance a Tg(flk1:GFP) reporter can be expressed in blood vessels and be visualized by fluorescence microscopy. Although iPSCs allow for a more native context, the ability of zebrafish to reproducibly make microvascular structures make them highly attractive for SVD modeling. Further, expertise and skill in gene editing is allowing the rapid creation of gene knock-outs and knock-ins throughout the zebrafish genome. We now have the ability to humanize either by putting in patient gene variations at the zebrafish version of the gene.  Or, swapping out the entire gene for the human gene coding sequence.  The end result is a well controlled system for examining effects of clinical variants on gene function.

CRISPR Engineering can be used to install variants into zebrafish

The creation of precision gene edits in zebrafish allows accurate measurement of the functional consequence of a clinical variant. The use of CRISPR (clustered-regularly-interspaced-short-palindromic-repeats) guide RNA targets cas9 nuclease to a specific genomic locus and has become a common method for targeting DNA cleavage at a genomic locus near a clinical variant target site.  The CRISPR method has become quite routine for genomic locus disruption through Non-Homologous-End-Joining (NHEJ) activity, which creates gene-disrupting indels at a cleaved locus [31,32].  More challenging to achieve is the use of Homology-Directed-Repair to create precision genome editing at a target locus [33]. Often a donor-homology DNA is used to instruct the cell’s natural DNA repair mechanisms to insert a specific sequence of DNA at the cleaved locus. Some groups have developed ways to use donor homology sequences to guide precision insertion of content into the genome of iPSCs and create precision deletions [34] or precision insertion of reporter genes [35,36]. Yet, interference from NHEJ-mediated indels in attempts at precision editing can pose a problem when the researcher desires to  isolate a line with only precision edits. Often biallelic editing occurs in an HDR attempt that results in a complex heterozygote. One allele may report to edit as desired, but often the other sister chromatid locus has an undesirable indel. Development of methods that suppress indel formation by avoiding NHEJ activity can be useful in the creation of a biallelic conversion that creates the desired HDR-mediated edit in both chromatid loci.

Humanization increases the data relevance of animal models. In this project idea, we can create a humanized zebrafish expressing the hNOTCH3 coding sequence inserted in the first exon of the zebrafish notch3 gene. In a two step procedure, we first use HDR-directed CRISPR gene editing to insert a phiC31 transposase acceptor sequence (attB sequence: CGGTGCGGGTGCCAGGGCGTGCCCTTGGGCTCCCCGGGCGCGTACTCCAC) to disrupt the notch3 locus with early stop codon insertion. Next we rescue the null with phiC31 insertion of hNOTCH3 expression cassette, which is a proven method for inserting large cargo at site specific loci in zebrafish. The cassette cargo contains a self cleaving T2A peptide prior to the human hNOTCH3 coding sequence. This enables expression of the human transgene to be driven by the promoter elements of the zebrafish notch3 gene and yet avoid chimeric protein formation with the vestigial notch3 coding fragment. To create a clinical variant model, the same plasmid used for human hNOTCH3 insertion is modified to contain a clinical variant (C174Y). Heterozygotic animals are expected to be generated (trangene/+). Both the attB containing animal (“knock-out”) and the hNOTCH3(C174Y) are expected to not isolate as homozygous due to essential nature of NOTCH3, while the hNOTCH3(wt) is hoped to remain viable as homozygote. Once these goals and expectations are met, the animals can be used to explore CADASIL associated pathologies. For instance, viral particles expressing the S-peptide receptor binding domain can be exposed to normal and variant zebrafish to monitor for different rates of viral entry.

The uses of a humanized zebrafish model range from diagnostic to drug discovery applications.

Researchers at various institutions can use the animals to determine which human pathologies are conserved. For mechanism-directed drug development, researchers can use in silico methods to discover small molecules that can be screened for specifically restoring the cysteine balance and promoting normal gene function. For pathway-directed drug development, researchers can use the animals for RNA-seq experiment to discover biomarkers consistent with disease and then harvest these genes with high expression response to create fluorescent reporters of pathogenic activity. The end result of this project funding is a platform for rapid assessment and drug discovery in CADASIL-associated disease.