Home > Blog > The Good, Bad and the Ugly of Reactive Oxygen Species

The Good, Bad and the Ugly of Reactive Oxygen Species

Reactive oxygen species (ROS) are free radicals that have been found to extend lifespan at low levels, however, they are lethal at higher doses. So is the saying ‘what doesn’t kill you make you stronger’ true? Or should free radicals be avoided as much as possible? In this article we discuss the current paradoxical findings, and focus on genetic disorders such as Progeria which is characterized by rapid aging and elevated ROS levels.

Like Clint Eastwood, I have always enjoyed the liberation of doing things a bit differently from the standard way, but when it comes to the Free Radicals (peroxides, superoxide, hydroxyl radical, singlet oxygen and alpha-oxygen), one needs to question the intent and effect. 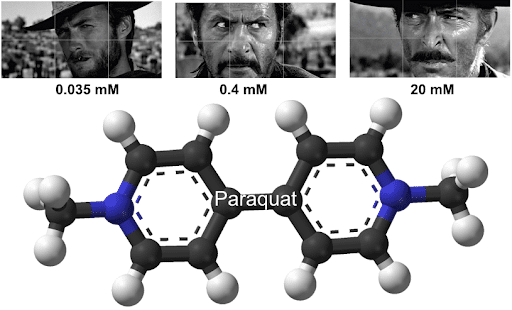 Effects of ROS on Aging

Intriguingly, a little bit of free radical action can extend lifespan (Wang and Hekimi 2015). For instance, when C. elegans were exposed to less than 0.1 mM of the common herbicide paraquat, the low levels of superoxide anion that were generated led to increased lifespan (Yang and Hekimi 2010; Yee, Yang, and Hekimi 2014). This surprising longevity finding caused the researchers to speculate that:

It is clear, however, that C. elegans can no longer reach adulthood when the dose of paraquat reaches 0.4 mM (Senchuk, Dues, and Van Raamsdonk 2017). And above this concentration, (at either 2-4 mM chronic exposure for days, or > 20mM acute exposure for a few hours), the effects are lethal to life. So, perhaps a bit like getting exercise, a little bit of free radical action can do some good, but way too much and it will be harmful. This indicates that there is an optimal level of ROS in the cell (“the Good”), where the levels of ROS signalling are good for growth, survival and apoptosis, and yet when ROS is pushed above this low level, toxicity to the animal starts to prevail. This helps explain the strange “inverted U effect” seen in C. elegans: low doses of antioxidants may DECREASE lifespan while low doses of oxidants can INCREASE lifespan, and then, at higher doses, the effect becomes switched and oxidants compromise lifespan while antioxidant tend to extend it (Desjardins et al. 2017). 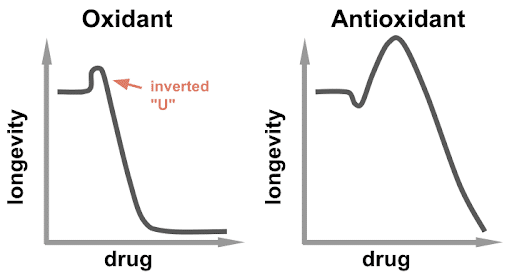 Recently, a comprehensive review (Shields, Traa, and Van Raamsdonk 2021), acknowledged this paradox, but stated that the general trend is that:

This provides support for the free radical theory of aging:

Certainly, at the higher doses of paraquat, the effects are bad. In fact, the effects are down right ugly – when concentrations reach 200 mM animals are dead in just a few hours of exposure (Senchuk, Dues, and Van Raamsdonk 2017).  Obviously, high levels of reactive oxygen species are a bad thing to have in your body.

As portrayed in the ‘inverted U effect’, laboratory studies on genetically-modified model organisms have caused two generalities to be widely accepted: that the overexpression of antioxidant enzymes has a tendency to extend lifespan (yeast, flies and worm), while their elimination has a tendency to shorten lifespan (yeast, worms, flies and mice) (Shields, Traa, and Van Raamsdonk 2021). Moreover, these same authors note that a variety of antioxidants (N-Acetyl Cysteine, Vitamin C, and Vitamin E) are known to extend lifespan in animals when you treat them with drug to make them a “chemically-modified” model organisms (worms, flies and mice), but it remains controversial if there is benefit in humans (Bjelakovic et al. 2012; Bjelakovic, Nikolova, and Gluud 2013).

While there is still controversy on both sides of longevity: whether antioxidants extend human life, and whether ROS are the primary cause of aging, syndromes such as Progeria (Hutchinson-Gilford Syndrome) can give us invaluable insights. Progeria is an extremely rare, progressive genetic disorder that causes children to age rapidly, starting in their first two years of life. Progeria cells also show higher levels of ROS and DNA damage. The LMNA gene is the sole cause of this syndrome, although there are at least a dozen other gene dysfunctions that lead to progeroid syndromes of shortened life (POLR3A, BANF1, WRN, PYCR1, PDGFRB, RECQL2, B4GALT7, SLC25A24, BSCL2, GORAB, ERCC8, ERCC4) or a prematurely-age appearance (LTBP4, FBLN5, ATP6V0A2, ATP6V1A, EFEMP2, ALDH18A1, ELN).

These syndromes of shortened life or premature aging have shown that genome editing can produce shortened lifespan, as although many of these genes are lethal when made as a homozygous knockout (KO) disruption, some can be removed without causing death – these result in premature aging. One such gene is DYRK1A. In humans, the loss of DYRK1A results in cells with similar disruption as Progeria: lack of ROS regulation (elevated levels) and DNA damage; in mice the homozygous knockout is lethal (Fotaki et al. 2002), but in C. elegans the removal of this gene renders an animal that can survive but have a shortened lifespan. A slight, but notable, digression is that this emphasises the importance of taking advantage of multiple model organisms in research, as some are more suited to certain questions than others.

Returning to the topic at hand, the C. elegans’ lifespan was found to be about 30% shorter in the loss-of-function KO of the DYRK1A ortholog (mbk-1), than in the wild type. When a human coding sequence for DYRK1A was inserted as gene replacement of mbk-1 (hDYRK1A), an intermediate level was achieved for rescue of function. When a clinical variant was installed into the humanized locus (R467Q), a partial loss-of-function defect was observed, indicating the clinical variant has abnormal DYRK1A function.

This article has discussed the recent findings that the effect of oxidants and antioxidants on lifespan depends on the dosage, and the model organism being tested. Therefore, to get answers for any given compound, a bit of trial and error testing is what is needed (and perhaps a “fist full of dollars”) 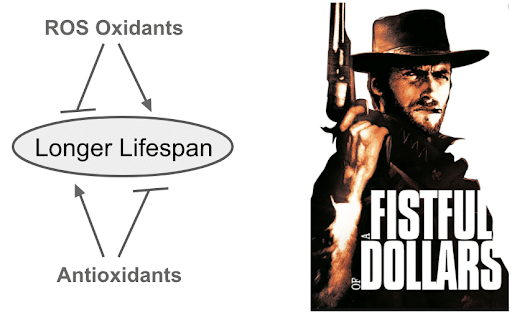 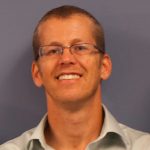