Skip to content
Home › InVivo Biosystems Blog › Aging & Healthspan › What Is Lifespan And Healthspan – And How Are They Connected?

Humans are living longer than any other time in history, but what is the quality of life during these years? This article will discuss lifespan and health: what are they, how are they different, and how are they connected?

The last century has seen a rapid increase in life expectancy: in the USA life expectancy has nearly doubled from 1900 to 2010 (47.3 to 78.7 years) (Crimmins, 2015). And this is not just limited to the US – worldwide there was a 6 year increase in life expectancy between the years 2000 and 2019 (66.8 to 73.4 years) (GHE: Life Expectancy and Healthy Life Expectancy, n.d.) While one might think living longer is better, a long life is not necessarily synonymous to living a healthy life. Lifespan refers to the total number of years alive, whereas healthspan is how many of those years are lived free from serious disease (Harvey A. Friedman Center for Aging, 2017).

While the USA’s life expectancy is tracked by the National Center for Health Statistics and the Center for Disease Control and Prevention (CDC), which collects and reports on the data yearly, no such measure exists for healthspan (Arias et al., 2021) This is because aging is not recognized as a ‘disease’ by the US federal government; in fact, no country in the world has classified biological aging to be a disease (Bulterijs et al., 2015).

To meet this gap in data, the World Health Organization (WHO) began collecting Healthy Life Expectancy data, nicknamed HALE (Harvey A. Friedman Center for Aging, 2017). HALE is calculated utilizing the Sullivan Method, which calculates the number of years-lived for specific age intervals, based on the probability of death at each stage. Then, the number of years lost due to disability (YLD) are estimated - with adjusted weight for severity, The sum of years lived without these ‘years lost to disability’ is considered the health-adjusted years lived at each age interval [Figure 1]. Ultimately, HALE is the cumulative number of health-adjusted years, divided by the total years lived by each age interval (WHO, 2014). 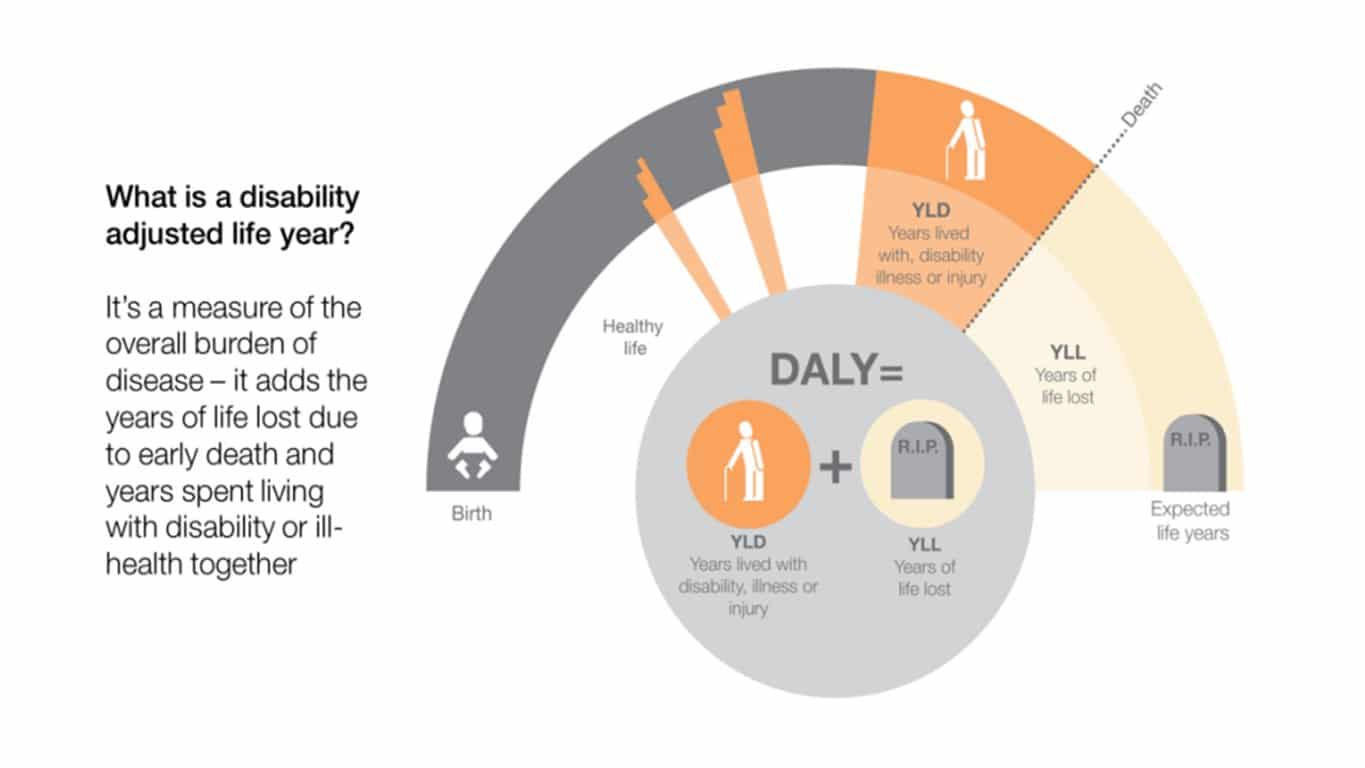 Figure 1. What is a Disability Adjusted Life Year (DALY)? It is a measure of the overall burden of disease - it adds the years of life lost with the years lived with disability or in ill health together. DALYs allow us to make comparisons between countries(Middlesex University Public Health Society, 2018) 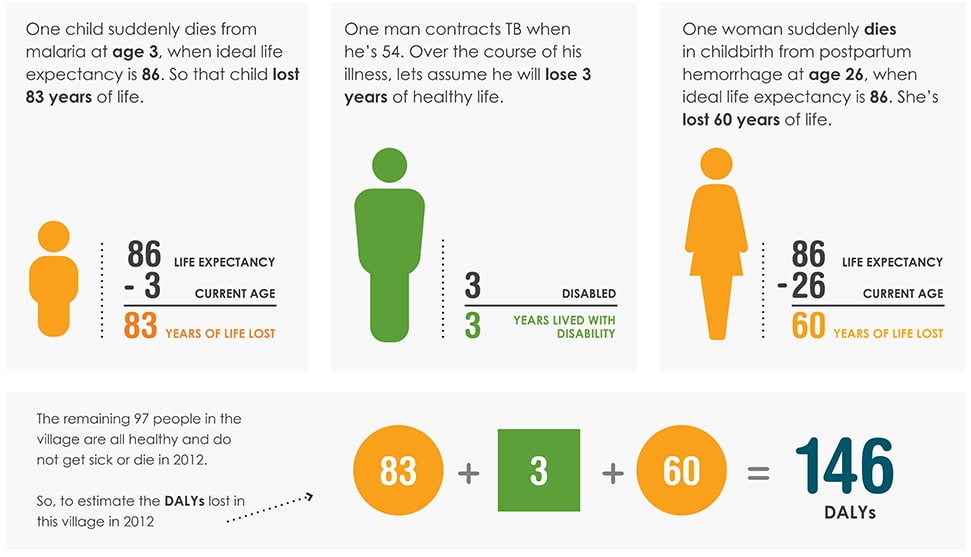 Like lifespan, healthspan has increased from 2000 to 2019, however, they are not increasing at the same rate: lifespan rose 6.6 years while HALE only increased 5.4 years)(GHE: Life Expectancy and Healthy Life Expectancy, n.d.-b) [Figure 2]. 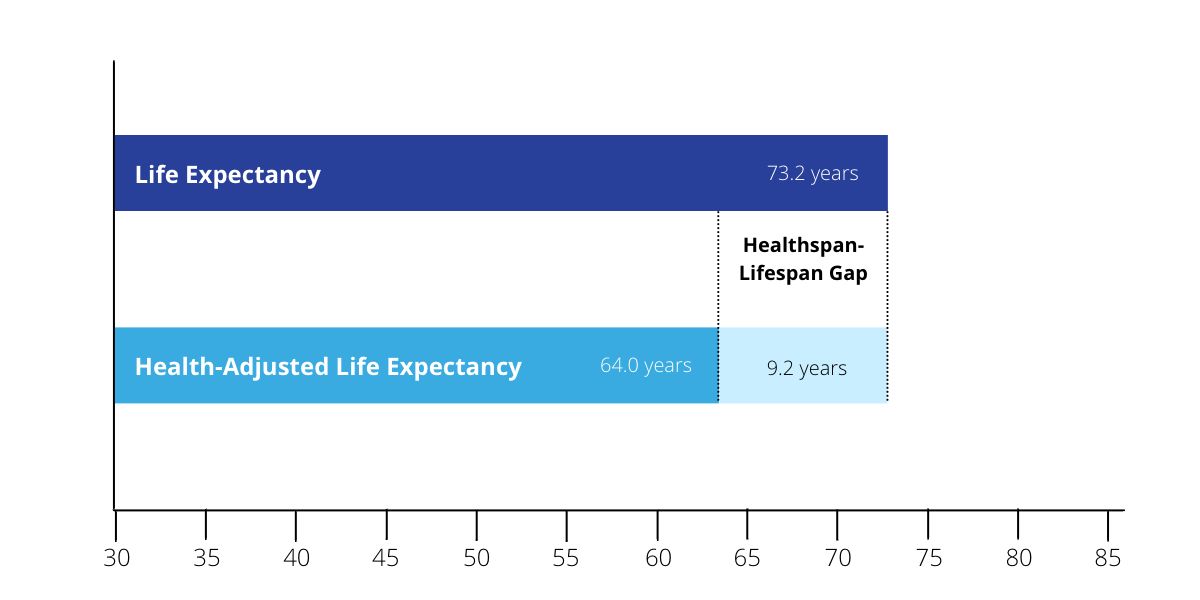 This means, on average, we are unhealthy for 13% of our lives

So where do we go from here?

The good news is that, being aware of this healthspan-lifespan gap means we can work on finding ways to treat it: the “geroscience hypothesis” suggests that aging is the number one risk for all chronic diseases, and thus, when trying to improve healthspan it would be more advantageous to treat the underlying factors of aging rather than treating each chronic condition at a time (Tournas & Marchant, 2019).

Already there is a lot of research being conducted utilizing one of the premiere models for lifespan studies: C. elegans. This being said, healthspan will be a field to watch in the coming years - check out recent articles using C. elegans below. Or read part two of our lifespan/healthspan blog series for a comparison of the models being used in this research.