Home > Blog > Healthy Aging and Longevity Research is on the Rise – which is the Best Model Organism to use?

Healthy Aging and Longevity Research is on the Rise – which is the Best Model Organism to use?

Humans have been interested in extending our lifespans for centuries, from quests to find the fountain of youth, to Alchemists attempting to determine the formulation for the elixir of life potion, to modern-day dietitians recommending a calorie-restriction and fasting. However, with the advancement of technology researchers are getting a better picture of how, and why we age. This is a rapidly expanding field of study, but when planning an experiment which model organism should you use? Furthermore, as discussed in a previous article, there is growing awareness that there is a gap between our lifespan and healthspan – that a long life does not necessarily equate to a healthy life. To that end, both sides need to be addressed when conducting lifespan studies. In this article we will compare and contrast the model organisms currently being used in longevity and healthy-aging research.

Emerging tools, such as RNA-seq, are enabling researchers to better characterize the processes involved in aging. Even before these new technologies were developed, however, we’ve understood that the rate humans age is variable: for instance, the rare genetic condition progeria is characterized by children aging and dying rapidly. Conversely, there are a group of people, ‘centenarians’, who are over 100 years old (currently there are over half a million worldwide) (Tournas & Marchant, 2019; Buchholz, 2021). But, can the rate of human aging be altered? And, how do we ensure these additional years are healthy ones? Interestingly, whereas the increasing life expectancy has not equated to more healthier years in the general population, the typical centenarian experiences a later onset of chronic illness than the average person. 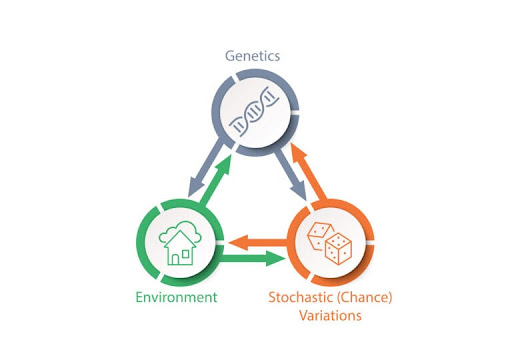 Figure 2. The Tripartite Phenotype of Aging is a model describing how genetics, environmental factors, and stochastic, or chance, variations shape longevity (Finch & Haghani, 2021).

While the children of centenarians live above-average lifespans, estimates of span “heritability” consistently vary from (∼15-30%), and according to Ruby et al. (2018), the number may be even lower – under 10%. Instead of being dependent on your parents, then, it appears that your longevity is more reliant on key metabolic pathways and related physiological processes that mediate the aging process (Tournas & Marchant, 2019; Häsler et al., 2017). It has been widely hypothesized that gene variants, ‘longevity-variants’, within these pathways enable the slowing or counteraction of diseases, and thus, enable their carriers to live longer (Häsler et al., 2017). Currently, three loci (APOE, FOXO3A in the insulin‐IGF1 pathway, and 5q33.3) have been shown to influence extreme longevity, however, it is expected that far more exist.

Usefully, many of the regulatory pathways involved in biological processes, such as aging, have been conserved during evolution. This makes it possible for researchers to investigate human longevity, healthspan, and the mechanisms behind aging, in model organisms.

C. elegans have numerous advantages which have made them a widely-used organism for biomedical research in general, and for longevity research in particular. C. elegans have a transparent body, are cost-effective, and can be cultivated on agar plates or in liquid media; thus, they are a good model organism for a wide variety of high-throughput manipulations and are easily genetically manipulated utilizing tools such as CRISPR/Cas9. Furthermore, C. elegans have a short lifespan (4 weeks), which makes longitudinal studies feasible, and their genes are highly conserved with humans.

With these numerous advantages it isn’t surprising that this model has given way to many discoveries in the lifesan/healthspan field such as the groundbreaking demonstrating  that  mutations  in  a  single  gene  can  significantly extend  lifespan. In 1993, it was discovered that mutations in daf-2 doubled the animal’s lifespan (Kenyon et al., 1993). This breakthrough linked the insulin/IGF-1 pathway to lifespan — and to this day is the best understood of the signaling pathways in regards to aging.

Yeast cells are the simplest eukaryotic model, and yet, despite their simplicity there is surprisingly high similarity between yeast and humans — have been shown to be a powerful model of human diseases such as neurodegenerative disorders (Oliveira et al., 2017). There are two different paradigms of aging in yeast — replicative lifespan (RLS), which measures the replicative potential of individual cells, and chronological lifespan (CLS), which measures the survival of an entire cellular population in the post-mitotic, non-dividing phase (Taormina et al., 2019).

Commonly used as a developmental model, zebrafish are becoming increasingly used in longevity and healthspan research as a model for DNA damage, aging, and cancers (Cayuela et al., 2019).

It has been found that, unlike birds and mammals, zebrafish genomes have four distinct, functional, IGF genes (Zou et al., 2009). And, despite this difference, zebrafish’s insulin/IGF genes can still provide insight into human function: zebrafish’s igf-2a and -2b genes are orthologous to human IGF-2, and igf-1a is the IGF-1 ortholog.

Perhaps zebrafish’s most valuable attribute when studying aging and healthspan, however, is their ability to act as a model for diseases that cause premature aging in humans such as Bloom’s syndrome (BS), Cockayne syndrome (CS), and Werner syndrome (WS). This is because zebrafish accumulate telomere-dependent replicative senescent cells, both when they are left to develop naturally, and in telomerase zebrafish mutants (Cayuela et al., 2019). Thus, zebrafish are emerging as extremely powerful models to examine the underlying mechanisms of aging.

A tried and true model, the fruit fly has been utilized in research for over 100-years: it was the first organism to have a full genetic map, and continues to be one of the most popular models for human diseases. Fruit flies have a high rate of reproduction, a short generation time (10-12 days), and a short lifespan (4-6 weeks). Their popularity for human disease research is understandable as despite their simplicity, fruit flies have functional orthologs for approximately 60% of the genes that are known to be involved in human diseases (Taormina et al., 2019). Notably, research has found that insulin/IGF-1 receptor mutations can also increase the life span of Drosophila, by as much as 80% (Tatar et al., 2001).

Mice are the most widely used mammalian model for aging research, this means that they are a robust model with many available resources. Mices’ genome is almost the same size as the human one (2.5 Gbp and 40 chromosomes), and 99% of the 25,000 genes have a human orthologue. Mice also have the advantage of an immune system, musculoskeletal apparatus, endocrine system, digestive system, and even nervous system similar to humans both in function and architecture unlike fruit flies and nematodes. However, this model is expensive, with long generation time (8-10 weeks), a small brood size (6-8).

Unlike worms and flies, which have a single insulin/ IGF-1-like receptor, mice have separate receptors for insulin and IGF-1. Despite this difference, GH/IGF-1 signaling has been shown to impact mice’s longevity similar to worms, fruit flies, and yeast. IGF-1 receptor heterozygous knockout mice live w30% longer than wild-type, and males live 16% longer (though the latter value was not statistically significant) (Holzenberger et al., 2003).

Mice were also the first model in which researchers found a single-gene mutation that increases lifespan: the Ames dwarf mouse has a point mutation in the Prop 1 gene and live 49% and 68% longer (male and females respectively) than their siblings who do not have dwarfism (Taormina et al., 2019; Brown-Borg et al., 1996). This being said, additional  research and  clinical  trials  are  needed  to  determine  whether  and  to  what  extent  these interventions  work  in  humans.

Furthermore, numerous potential longevity-interventions that were identified in animal studies went on to subsequently fail in human clinical trials, thus, this ought to be kept in mind when deciding which model is best for any particular study.

Needless to say, human studies have the advantage of testing on the ultimate subject; thus, the translatability of these studies’ results is not a concern. It should be noted that there are exponentially more regulations surrounding testing on humans – to learn more about the clinical trial funnel you can read our blog on ‘The Impact of the FDA’s Expedited Programs’. Human trials on longevity are further hindered by the lack of recognition and available funding, as aging is not considered a disease.

This being said, most of the progress that has been made in the longevity field has come from animal studies as human trials are expensive, have many ethical barriers, and the potential for confounding factors. For longevity and healthspan studies in particular, human trials are less than ideal as humans are long-lived (mean ~80 years), making it extremely difficult to conduct a study that spans participants’ whole life. 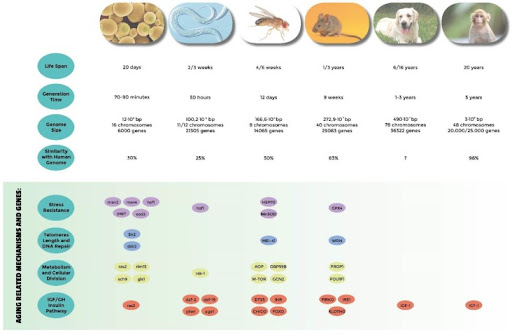 Figure 3. Comparative analysis of the most used model systems in aging research. Genome informations are from NCBI (Taormina et al., 2019). 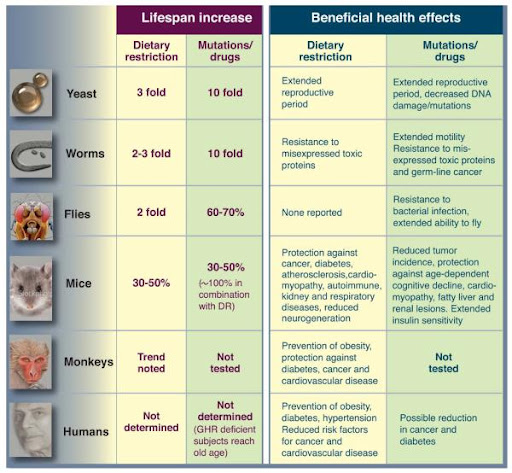 Figure 4. A model for the conserved nutrient signaling pathways that regulate longevity in various organisms and mammals (Fontana, Partridge & Longo, 2010). 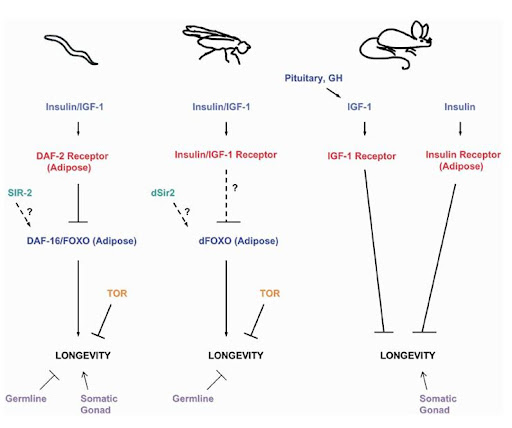 Figure 5. Genes, Pathways, and Tissues that Have Been Shown to Influence the Life Spans of More than One Animal Species Dashed lines, plausible regulatory relationships (Kenyon, 2005).

This article has given a brief overview of the models currently being utilized in longevity research, their benefits and limitations, and their impact on the field. However, it is important to note that ideally, no one model is used in isolation, as multiple-model systems can help strengthen the validity of a study’s results. For instance, the metabolic pathways involved in Drosophila and C. elegans have also been confirmed in mammalian mice models. It has also been recommended that, when possible, researchers test both lab and wild animals, as laboratory conditions may have caused genetic drift (particularly on mice) (Taormina et al., 2019). While model organisms benefit from many logistical considerations: ease of conducting a longitudinal study, lower cost than human studies, less ethical considerations, and well-established genome-editing tools – results from these studies can be inappropriately generalized, as it can be difficult to know what will translate to humans.

LinkedIn
Alexandra is a Content Marketing Specialist and Grant Writer for InVivo Biosystems. She graduated from the University of St Andrews in 2020 where she earned a Joint MA Honours Degree in English & Psychology/Neuroscience with BPS [British Psychology Society] Accreditation. She has worked as a research assistant, examining the LEC’s (lateral entorhinal cortex) involvement in spatial memory and integrating long term multimodal item-context associations, and completed her dissertation on how the number and kinds of sensory cues affect memory persistence across timescales. Her hobbies include running, boxing, and reading.